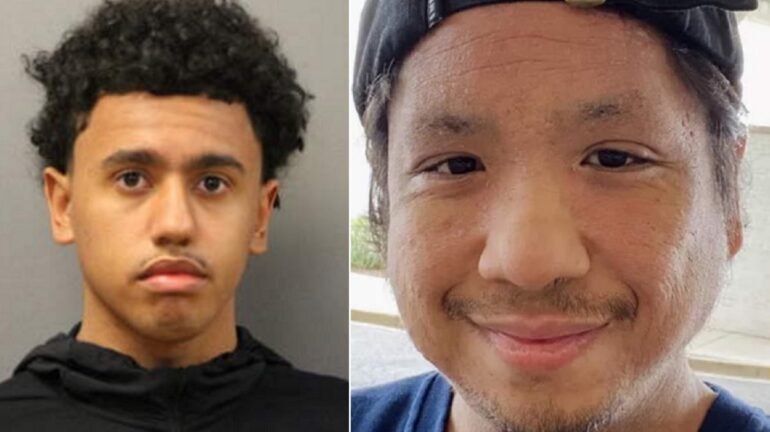 CHICAGO, IL—An 18-year-old man opened fire from his apartment window and killed a passing motorist because he thought the victim’s van was too noisy, prosecutors said Monday.

“This sh*t is funny as hell,” Gaven Leon allegedly said in a video he recorded at the murder scene as police investigated the shooting. “This is legendary footage … who would do such a thing?”

The shooting happened around 11:30 p.m. on February 3, 2022, at the intersection of Pulaski and Irving Park roads, reports CWB Chicago.

Ryan Balbag, 30, and two of his passengers were stopped at a red light not far from Leon’s third-floor apartment located on the 3900 block of West Irving Park. Leon allegedly became annoyed by the noise from Balbag’s van and fired a round toward the vehicle using a rifle with a green laser attachment, according to Assistant State’s Attorney James Murphy.

The 18-year-old unjammed his gun, reloaded, and fired a second-round as a witness watched from his couch. One of the rounds flew through the back of Balbag’s head. He died from his injuries two days later, according to CWB Chicago.

“Ryan was always smiling and just had the most wholesome and positive aura about him,” James Armband said in a GoFundMe campaign after the murder. “I would like to think that, in the end, that is how he would want us to continue on his legacy and memory.”

“He made the world a better place wherever he went and truly brought out the best in those around him. Ryan still had so much life left to live.”

While police were investigating the crime scene, Leon told a friend on Facetime that he shot someone from his window. The next day, Leon allegedly told another person that he fired out the window because Balbag’s van was too loud, according to Murphy.

Detectives found a plethora of evidence from pictures to video footage on Leon’s phone, which showed him trolling officers while they were conducting their investigation back in February.

“Thank you for coming, appreciate it,” Leon told cops.

While authorities scanned through Leon’s phone, they also discovered he may have shot at least one other driver before murdering Balbag.

Leon posted a picture online on January 30 with captions that read: “this n*gger over here doing burnouts at 2 a.m. in the f**king morning, so I shot at his ass,” Murphy explained.

Leon is being charged with one count of first-degree murder. He is currently being held without bail.