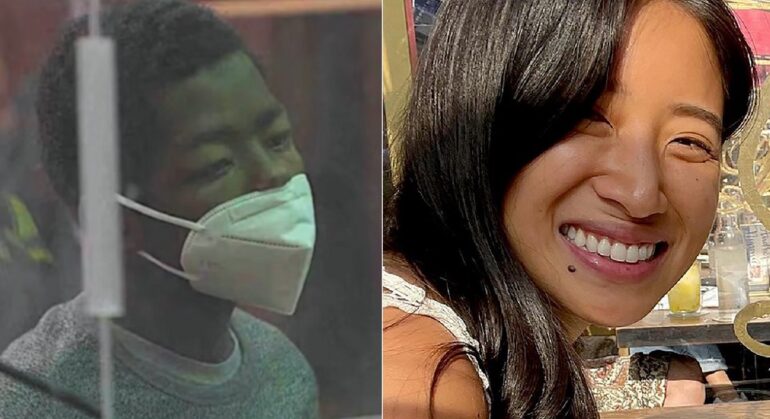 NEW YORK CITY—Assamad Nash, 25, the unhinged suspect charged with stalking and brutally murdering Christina Yuna Lee in her Chinatown apartment believes he’ll get off scot-free because he wasn’t caught on video stabbing her 40 times while trying to sexually assault her.

Christina Yuna Lee—who was Korean-American—was savagely stabbed to death and died painfully inside her own apartment around 4:30 a.m. Sunday, February 13, 2022.

Security footage showed the suspect, identified as 25-year-old Assamad Nash, following Lee as she got out of a cab and entered her Chrystie Street apartment building. Nash followed Lee up six flights of stairs and into her apartment

When police arrived, Nash attempted to deter them from entering Lee’s apartment by imitating a female voice, according to prosecutors.

“We don’t need the police here—go away,” Nash told police as he barricaded himself inside the apartment for roughly an hour-and-a-half before NYPD’s Emergency Service Unit busted the door down, reports The Post.

In a 30-minute video interview from Rikers Island, Nash said the evidence against him won’t be enough to put him away, reports The Post.

“First of all, they gotta have me on camera killing her, I’m not on camera touching her at all,” he said.

“They only got me on camera going into the building, that’s it. They ain’t got no camera showing me killing that lady.”

Nash told The Post he was “trying to get into a mental health program at the hospital,” in an attempt to beat the serious charges against him. He soon erupted with fury from behind the glass wall at Rikers when questioned about his legal strategy.

The 25-year-old murder suspect originally claimed another man busted into Lee’s apartment and committed the crime and Nash tried to save her, but then changed his story.

When The Post asked him to describe what happened leading up to Lee’s killing, Nash shrugged the question off.

“I was too high,” Nash said, adding he was under the influence of “dust and K2” he had bought at 125th Street and Lenox Avenue in Harlem. Nash yawned and occasionally laughed during the interview.

“I don’t remember nothing. I told you. I wasn’t in my right state of mind. It’s crazy being on that stuff.”

Nash is charged with first-degree murder, burglary, and sexually motivated burglary. When reminded of those charges, Nash stated: “That situation happened. Then she died. And they told me I did that and all that crazy stuff, you know?”

Nash then claimed he met Lee in a park near her home and the two would allegedly “chill and relax” together every so often. When a reporter asked why a successful creative producer who worked at Splice would invite a homeless man into her home, he became irritated.