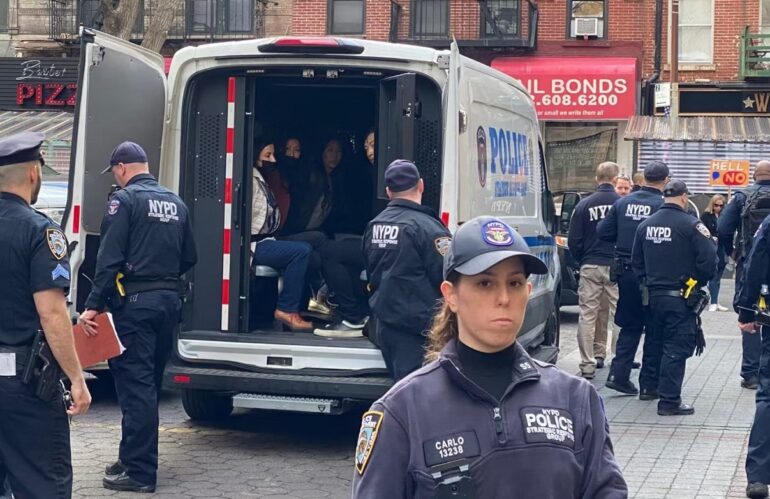 CHINATOWN, New York—A decision to replace Riker’s island with four borough-based jails in New York City, is getting major pushback from Chinatown, where one of those jails is set to be built—a community still under attack on a daily basis.

A human chain was formed on Baxter Street, chants of “no new jail” resounded in the area, and construction crews were blocked from working on Wednesday morning, reports ABC7.

One-by-one, protestors were arrested and hauled off the site.

Chinatown residents are desperate. They’ve been under continuous attack by the homeless population and by African-American assailants. The jail and three homeless shelters being diverted to Chinatown are the biggest threat to the community.

Evelyn Yang, the wife of former presidential and mayoral candidate Andrew Yang, was among those arrested.

“Hearing Mayor Adams in his own words calling than jail institutionalized hate against Chinatown and making the promise last year with his campaigning to the people of Chinatown that he would not allow this jail to go up if he were mayor … and then going back on his word … how dare you make this promise to people who have suffered so much and then turn their back on them,” Yang stated to ABC7.

The new jail at the site of the Manhattan detention complex known as the Tombs, is part of the city’s plan to close Riker’s Island, according to ABC7.

A spokesperson for the mayor’s office had this to say:

“This administration will always follow the law, and the law says the jails on Rikers Island must close on time. To follow the law and protect the safety of the community and all involved in this project, this work is proceeding. We have engaged deeply with the community every step of the way, and we are committed to continuing to work with them to limit the disruption of this project.”

City officials explained the existing building can’t withstand the extent of the renovation required and say council members made clear extending the deadline legislatively was a non-starter, reports ABC7.

However, community leaders pointed out that the global pandemic which we all experienced caused many deadlines to be changed in some form or another. It’s unreasonable that city officials would choose not to extend the closing of Riker’s Island and build a jail in Chinatown, which will also deal with multiple homeless shelters.

It doesn’t take a genius to figure out Chinatown residents will experience increased racial attacks once these homeless shelters are redirected to Chinatown along with a jail.