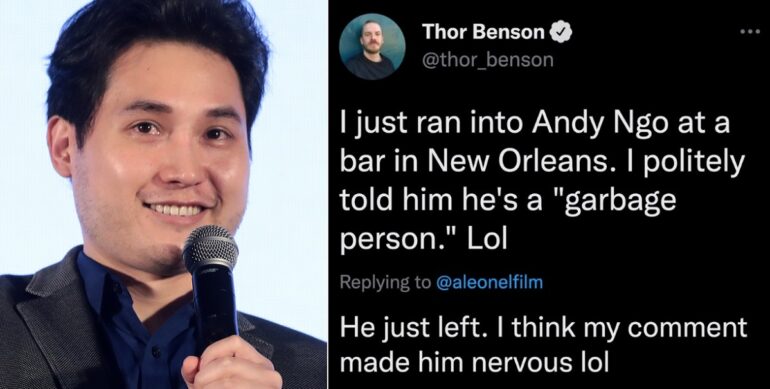 Freelance writer Thor Benson tweeted: “I just ran into Andy Ngo at a bar in New Orleans. I politely told him he’s a “garbage person,” on April 7, 2022.

Benson’s followers recommended he should have used violence against the random Asian man. One follower wrote, “Shoulda clocked him—also what bar?”

Another follower replied: “An ‘accidental’ elbow to his grill—twice—would have been fitting.”

Ngo claimed on Twitter “Thor Benson, a white freelance writer, thought he found me [and] instead harassed a random Asian in New Orleans [and] made him leave a bar. Benson’s followers said the man should have been assaulted.

Thor Benson, a white freelance writer, thought he found me & instead harassed a random Asian in New Orleans & made him leave a bar. Benson’s followers said the man should’ve been assaulted. @TracyConnor @CorinneIOZO you okay w/your contributor doing this?https://t.co/4AGDpu3YQd pic.twitter.com/C1NBGxq9VQ

Benson isn’t backing down or apologizing for the incident and instead tweeted “Andy Ngo supporters are trolling me. You can come here to be blocked. Have fun!”

He insisted the Asian man he accosted and caused to eventually leave the bar was Ngo.

This isn’t the first time random Asian men were mistaken as Andy Ngo. White liberals are known for their racism and resort to threats and physical violence. A random Asian man was harassed at a rally in Portland back in 2020 after being mistaken for Andy Ngo.

Once the white liberals realized the Asian man wasn’t Andy, they doubled down and kept calling the man “Andy” and never apologized.