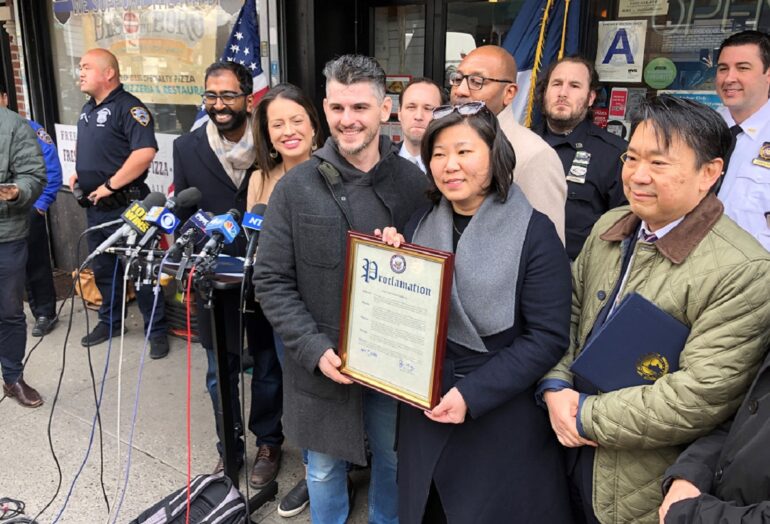 QUEENS, New York—The owners of Louie’s Pizzeria, father and son, who jumped into action to rescue a Korean woman as she was being viciously attacked during a robbery outside the restaurant were honored for their heroics on Friday, April 1.

38-year-old Louie Suljovic and his father, 68-year-old Cazim Suljovic, were working behind the counter last Saturday night when a 61-year-old woman was ambushed on the sidewalk.

Both father and son ran outside without hesitation to intervene and were stabbed several times in the process.

“They are true heroes,” Meng tweeted after the ceremony. “I salute their selflessness & bravery. Our borough & city are tremendously proud of them, & will never forget the sacrifices they made to their own safety in order to help a fellow New Yorker.”

“This is who we are,” said Louie Suljovic, a military veteran. “This is what loving thy neighbor is.”

EMT Michael Rojas, who witnessed the attack and later took the younger Suljovic to the hospital, praised the two men.

This afternoon, I held a special ceremony to honor the heroism of the #Queens pizzeria owner & his dad who were stabbed while stopping a robbery outside their establishment in #Elmhurst. Thank you to Louie Suljovic & his father Cazim of Louie’s Pizzeria! They are true heroes. 1/2 pic.twitter.com/SPaVjxky85

“They acted without thinking of any consequences and this is what heroes do,” Rojas said, adding that the two men were heroes during the pandemic, staying open to feed Elmhurst Hospital and first responders. “Not all heroes wear capes, some of them serve pizza.”

Louie Suljovic was stabbed once and was released from the hospital three days ago and is back at work. However, his father was stabbed nine times and remains hospitalized as he continues to recover from his injuries. Both men also suffered from collapsed lungs.

VIDEO. Hero pizza guy Louie Suljovic talks about his dad walking to nearby Elmhurst Hospital after being stabbed nine times. The two men intervened when an elderly Asian woman was attacked outside their pizza shop. Government officials honored their bravery. @wcbs880 pic.twitter.com/OkiiyQEUII

“Everything hurts,” the younger Suljovic said, but when asked whether he has any second thoughts now he replied, “Never. I would do it again right now, in the condition I’m in because that’s who we are. We’re people who would give ourselves. We’re New Yorkers, we have love for everybody, it doesn’t change anything. If you’re a stranger or a best friend, if you need help we’re here for you.”

Eun Hee Chang, 61, an immigrant from South Korea, told the New York Post that she was “very grateful” for the father and son duo who saved her life and is “overwhelmed with gratitude.”

A GoFundMe page has been set up for Eun Hee Chang, which can be accessed by clicking HERE

Yesterday we met the father son duo who may have saved Eun Hee Chang’s life. They too got stabbed while defending her. Tonight we met Chang. In what is common Korean behavior, Chang is blaming herself, doesn't want to attend follow ups w doctors & cops bc it'll get in way of work pic.twitter.com/6cs15J1K3L

Chang also doesn’t have any ill will toward her attackers, according to The Post.

“She said she felt bad for the perpetrators because they are young men and she doesn’t want to ruin their lives,” Hailie Kim speaking on behalf of Chang said. “She doesn’t want to do anything to hurt them. There is no anger on her part.”

While addressing reporters on Friday, younger Suljovic took aim at bail reform, stating current laws have created new types of criminals, who know no consequence, and demanded that change.

“I hope this incident is a catalyst for change. This city needs change,” Suljovic said. “We need to stop the violence, we need to put the people who are repeat offenders in prison. It becomes a revolving door, a literal revolving door, and I think the city’s had enough of it.”

VIDEO. He’s still recovering from being stabbed, but Elmhurst pizza store owner Louie Suljovic is being honored by officials for intervening when an elderly Asian woman was being attacked. Suljovic’s dad is still hospitalized. @wcbs880 pic.twitter.com/pqc5xCSp2N

The third assailant remains on the loose.