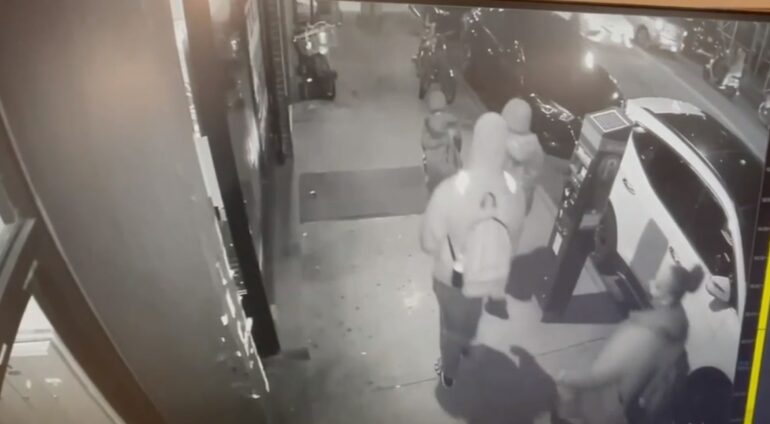 ELMHURST, Queens—A pizzeria owner and his son are being hailed as heroes after jumping into action to stop a robbery in Queens. Both were stabbed multiple times.

Police say a 61-year-old Korean-American woman was pushing a grocery cart outside of Louie’s Pizzeria on Baxter Avenue in Elmhurst when she was attacked and stabbed by three men just before 9 p.m. Saturday, March 26.

38-year-old Louie Suljovic, co-owner of Louie’s Pizzeria and military veteran, was working behind the counter with his 68-year-old father Charlie when they noticed the commotion outside, reports ABC7.

The two men jumped into action without hesitation.

“My father noticed it first, that the woman was attacked and she was on the floor, and my understanding was he heard screaming,” Suljovic told ABC7. “So he went after them and yelled my name. Once I heard my name, we both chased them down the block.”

Suljovic said the Korean woman suffered a long gash and was losing a lot of blood.

The victim didn’t want to appear on camera but told ABC7, she remembers being pushed from behind and knocked to the ground, having her bag stolen, and then being stabbed.

She added she does not know what her assailants said to her because of a language barrier.

Louie was stabbed while struggling with the assailants and his father was stabbed in the back nine times. Both suffered a collapsed lung.

“Trying to take a breath, but it’s hard to take a real breath, and you feel like a bubbling inside,” Louie said. “My dad’s a bull, like old school men. They don’t make them like they used to.”

Woman Arrested for Stabbing Asian Man to Death in Kansas

Both heroes held down two of the three suspects until police arrived and then walked themselves to the emergency room at Elmhurst Hospital across the street, reports ABC7.

The third assailant remains on the loose.

“People who know us in the area know our personality and what we’re willing to sacrifice for everybody in our area,” Louie said.

#Elmhurst heroes:
Local Military veteran and pizzeria owner Louie was working behind the counter at Louie’s pizza when he and his father witnessed an elderly woman being robbed outside. Without hesitation, they jumped into action to help and were stabbed in the process. (1/3) pic.twitter.com/CB42vjTsVH