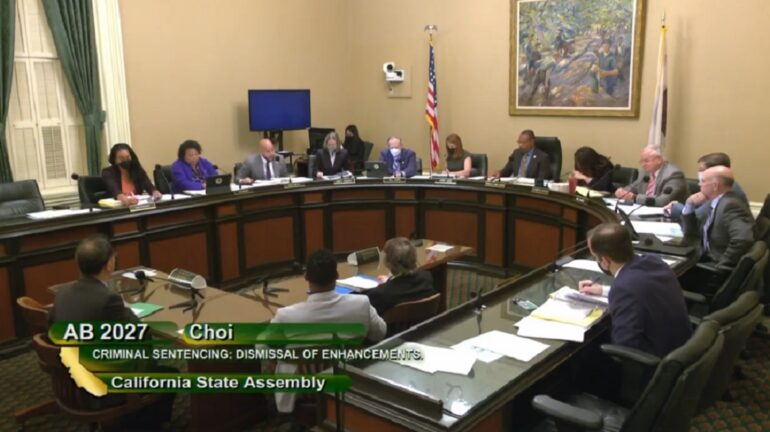 Assembly Bill AB2027 would have exempted hate crime penalty enhancements from the provisions of Senate Bill No. 81, which was authored by California Senator Nancy Skinner in 2021. AB2027 would allow judges in criminal cases the ability to actually add “hate crime enhancements.”

California politicians are aware the majority of attacks against Asian-Americans in the state are perpetrated by African-Americans. Had AB2027 passed, many African-Americans would have served longer prison sentences for attacking AAPI community members because of the hate crime enhancements.

“The Asian-American and Pacific Islander Community have experienced a surge of hate against them this past year in California. As a result, there has been an increase in depression and mental health in this community,” Assemblyman Steven Choi addressed the Public Safety Committee.

“Just about everyday, I read of stories, especially senior elderly people who were attacked for no reason on the street. They are so scared to leave their homes, go out shopping or walking,” Choi continued to state.

Assemblyman Choi continued to explain to the committee that Senate Bill No. 81 created a loophole in California’s sentencing laws by allowing offenders to avoid additional penalties imposed by related hate crime felonies.

The bill was killed and the majority of African-American politicians in the committee voted against AB2027; no surprise.

Assemblyman Steven Choi represents the 68th Assembly District (Irvine) and he is a Republican. Irvine is a city in Orange County, California, and is the safest city of its size for the 16th straight year. It’s also 50% Asian, 45% Caucasian, and 5% everyone else.

Choi was born in South Korea during the Japanese occupation and later moved to the United States. He was elected to the Irvine Unified School District School Board in 1998 and reelected in 2002.

“Took months to work on this, I testified in support during this meeting, was fully shocked when other Asians speaking were in opposition, some even saying hate crimes toward Asians were because of Trump,” stated James Mai, Orange County official, entrepreneur, and philanthropist.

Blaming Trump is the go-to excuse. Whenever an African-American attacks an Asian-American for no reason, “It’s Trump’s fault, he said ‘China Virus.’” Well, according to Princeton University Press, about 80% of African-Americans identify themselves as Democrats.

So, a majority of African-Americans do not support Trump but still follow his rhetoric against Asians? If we’re going to blame Trump, shouldn’t we also now acknowledge African-Americans are incredibly weak-minded for following the rhetoric of an ex-president they don’t support?