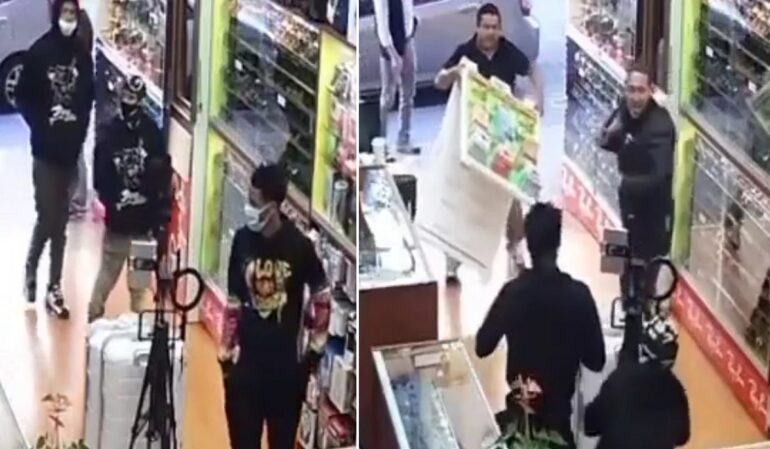 CHINATOWN, San Francisco—After barely surviving the pandemic the last two years, the owners of a San Francisco Chinatown camera store breathed a sigh of relief as tourists and foot traffic started trickling back in. However, as signs of recovery began to show, the owners found themselves getting robbed and attacked with hammers on Monday, March 21.

The terrifying ordeal began around 3:20 p.m. when a group of three teens walked into the store and asked about camera prices. They hung around for about three minutes and left. The same group returned about 30 minutes later, reports KPIX5.

“All of a sudden, they pulled out a hammer and they started trying to smash the glass,” said shop co-owner Sergio.

The smash-and-grab didn’t go as planned; the cases behind the counter are plexiglass and wouldn’t break. One countertop case made of glass did shatter and that’s when the attack turned from stealing cameras to swinging hammers at Sergio and his co-owner Ariel, according to KPIX5.

“One of the guys up there is trying to hit my partner with a hammer,” said Sergio. “I run and I try to grab a bat that I have. Try to protect myself and my business here.”

A business owner from a neighboring store came running over with a sandwich board trying to stop the attack. He got hit in the head with a hammer and ended up needing 10 stitches.

“One of the guys, they put the pepper spray in my eyes,” said Sergio. “The other guy is trying to hit me with a hammer and I’m trying to protect myself.”

Within minutes, the smash-and-grab hammer attack was over.

Both men, who have been in the camera business for 27 years, were nervous coming to work on Tuesday and are worried about what could happen in the future, reports KPIX5.

The Chinatown Volunteer Coalition told KPIX5 robbers often first pretend to be interested in an item, only to return later on. That’s exactly what happened with the camera shop on Monday.

“Sometimes people are deterred just by seeing sheer numbers, so there have been cases where we have seen someone look like they were going to attack or do something that’s criminal, but because they saw us or other people around, they chose not to,” the volunteer added. “Sometimes we have to yell.”