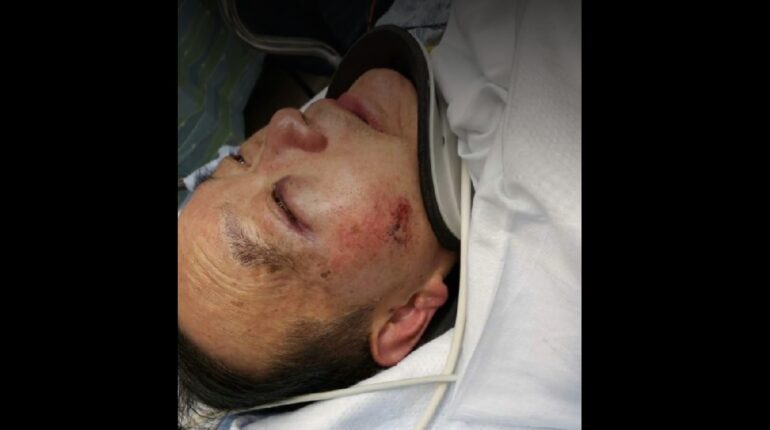 BOSTON, Massachusetts—Wei Wu, 64, speaking from his hospital bed at Tufts Medical Center, says he’s happy to be alive after being carjacked Thursday afternoon in Chinatown. “I wanted to stop him from stealing my car,” Wu told CBS4 Boston.

Wu was working Thursday afternoon selling oranges on Beach Street as he does seven days a week. He had just started up his car when a man approached him, hopped in the driver’s seat of the vehicle, and drove away. That’s when Wu tried to stop him.

The 64-year-old suffered serious injuries to his face and hands after he was dragged a short distance before falling off the vehicle.

“The guy stole his car and then he went to catch it and the guy slammed the door on his face on this side,” Gloria Zhu, Wu’s ex-wife explained.

The blatant and vicious nature of the crime has shocked the busy Chinatown community.

“He’s a very hard worker. He sells fruit during the day and at night he has another restaurant job,” a woman said. “A lot of people know him so I’m sure they all wish him a speedy recovery.”

The unidentified suspect drove Wu’s car to Commercial Street along Boston Harbor, exited the vehicle, and jumped into the water.

Police officers responded to reports of a man in the water and soon rescued him. Paramedics later transported the suspect to a local hospital where he is undergoing psychological assessment, reports Universal HUB.

Wu is very well known in Chinatown as the man who works hard selling fruit on Beach Street. However, after the injuries he’s sustained, he’s not quite sure he’ll be able to return again.