Crimes Against Asian-Americans Are Exploited to Fund Non-Asian Groups 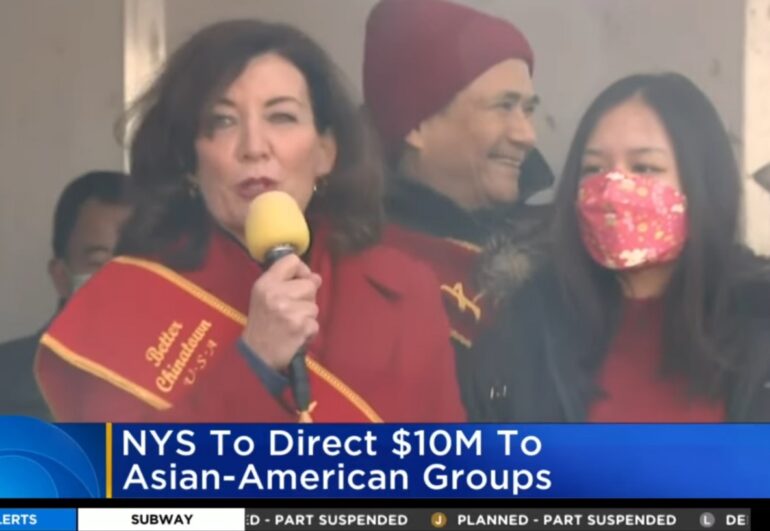 Remember, New York City is “the most progressive city in the world.”

Gov. Hochul’s funds will be split between the Asian American Federation, Coalition for Asian American Children and Families, and the Chinese-American Planning Council to distribute funds to 59 community organizations, reports the Washington Examiner.

“Instead of solving the root problem, the political establishment is consuming these tragic incidents and perpetuating the cycle of going easy on criminals and scapegoating innocent citizens,” Wenyuan Wu, executive director of Californians for Equal Rights Foundation stated to the Washington Examiner.

“Look at the politically motivated selection of the Asian-American organizations to receive public funds. These are the same groups that erode civil rights and equal rights for their Asian fellows. It is simply a shameless race grift,” Wu continued.

Some of the benefactors for Hochul’s $10 million fund are:

The Center for the Integration and Advancement of New Americans (CIANA). This organization helps illegal immigrants from the Middle East, North Africa, and Latin America. Nothing to do with Asians.

Caribbean Equality Projects. This organization serves “Blacks and Browns Queer and Trans undocumented immigrants” seeking asylum. Again, nothing to do with Asians.

Desis Rising Up and Moving (DRUM). This is a pro-criminal, anti-jail group. According to Wu, they once called Rikers Island a “torture chamber” that must be shut down forever. DRUM also claims new jails are “opportunities that lead to increasing policing and criminalization for communities of color.”

So if jail is bad, why are so many perpetrators who were supposed to be in jail murdering Asians in New York? GuiYing Ma, Michelle Go, and Christina Yuna-Lee were all murdered by African-American assailants who all had extensive criminal records.

Instead of more jails, DRUM demands more mental health centers and real housing for the homeless to be built, only then will Asian hate stop.

Asian-Americans are being used as pawns. Instead of remedying criminal justice, Gov. Hochul is choosing a pro-criminal ideology that will only get more Asian-Americans killed and of course, her party will blame “white supremacy.”