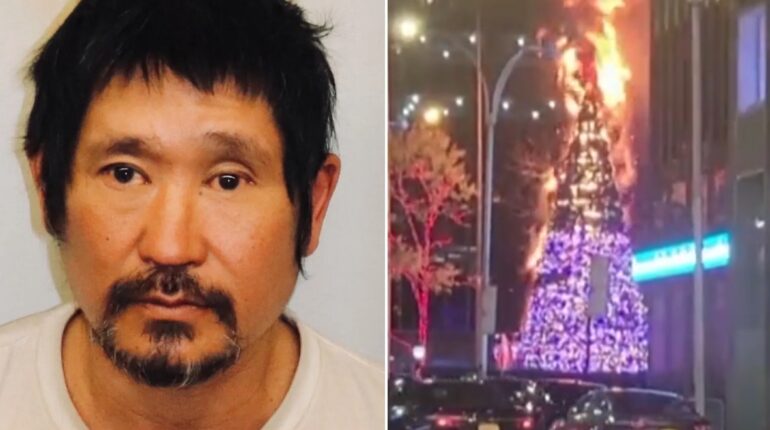 The 49-year-old vagrant has an extensive criminal record and is well known to the police. After being freed Wednesday night because his charges were not eligible for bail under the city’s new reform laws; he went on an incoherent rant outside the courthouse.

“I didn’t do it!” Tamanaha screamed at reporters along with insults and other obscenities before asking for a cigarette.

“The moms that want to rape their f—ing daughters — they set it on fire,” yelled Tamanaha, who had also allegedly exposed himself outside the Ghislaine Maxwell trial last week, reports The Post.

Tamanaha was charged with multiple misdemeanor charges—including arson, criminal mischief, reckless endangerment, and criminal trespass. He allegedly set fire to the 50-foot-tall artificial tree with a piece of cardboard, according to The Post.

Under New York law, arson is only considered a felony if the suspect tries to harm a person or commits a hate crime. Therefore, Judge Marisol Martinez Alonso granted Tamanaha a supervised release at the request of the prosecutor.

“Oh, he’s a nut. I can’t control him,” Richard Tamanaha of Hawaii stated to The Post. “Mentally, he’s not all there.”

The homeless arson suspect has a history of destructive behavior from drug abuse to exposing himself to reporters.

“I saw him walking around the square where media parks. He had a little weird behavior,” said Moon, who works for multiple outlets including Reuters. “He exposed himself to a female photographer and other people.”