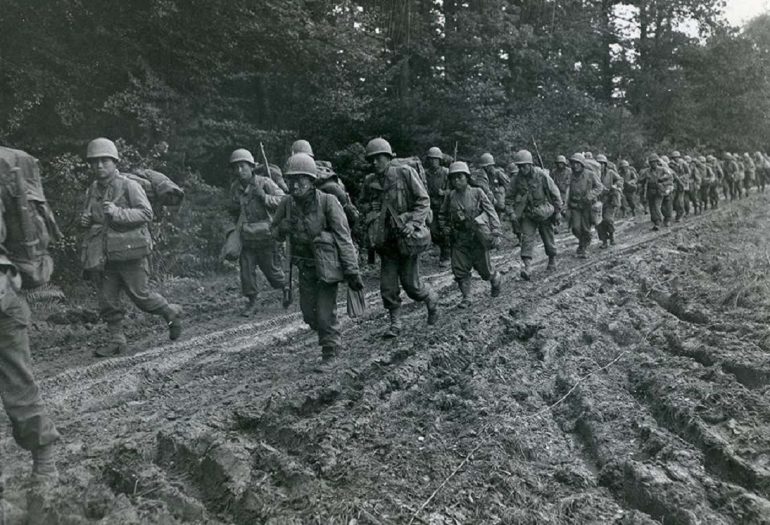 This came as American propaganda reels went out of their way to point out German-Americans weren’t really “German,” and showcased Admiral Nimitz and General Eisenhower as examples of good Germans. However, all Japanese-Americans were still considered “Japanese.”

Against this backdrop, thousands of second-generation Japanese-Americans (Nisei) joined the newly activated 442nd Regimental Combat Team on February 1, 1943, which mainly consisted of Japanese-American and some Korean-Americans from Hawaii.

The motto of the unit was “Go For Broke,” a phrase that meant putting everything on the line in an effort to win big.

By April 22, 1944, the men of the 442nd completed training and left Camp Shelby in Mississippi for the European front. They arrived in Italy in June 1944 and quickly began fighting alongside the 100th Infantry Battalion.

The 442nd earned a reputation for banzai-charging German lines and quickly overrunning them.

The unit, totaling about 18,000 men, earned over 4,000 Purple Hearts, 4,000 Bronze Stars, 560 Silver Star Medals, 21 Medals of Honor, and seven Presidential Unit Citations. The viciousness of the 442nd and their appearance confused many members of the Wehrmacht (German army) who heard the soldiers scream “Banzai!”

This was especially prevalent in the Rhineland Campaign when the 442nd rescued over 200 men of the 141st Infantry Regiment encircled by German troops. After six days of fighting, a banzai charge broke through German lines and allowed the unit to rescue 211 men.

However, banzai charges came at a staggering cost. The 442nd suffered over 800 casualties with 30 KIA in that battle. The incident was since named The Rescue of the “Lost Battalion.”

Despite all odds from years of suspicion and racism at home, the 442nd bravely and honorably fought for their country and proved they were just as American as anyone else. They still remain the most decorated unity in U.S. military history.