Asian Man Disarms Robbers Shoots Both of Them, Killing 1 in SF 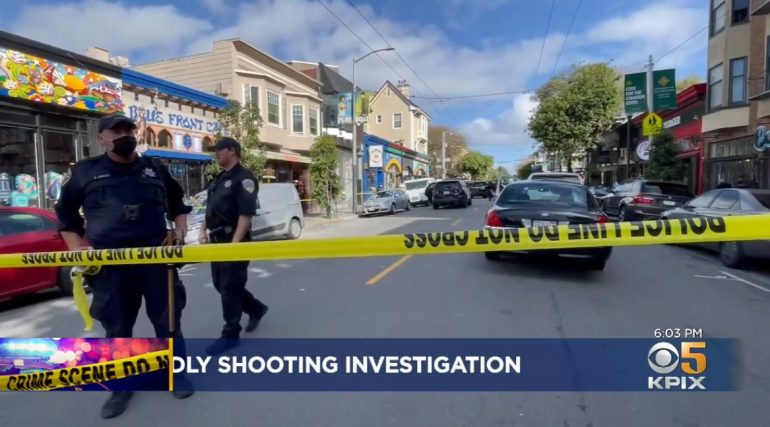 SAN FRANCISCO, California—Police are investigating a homicide in the Haight-Ashbury neighborhood after two people were shot Thursday afternoon during an attempted robbery.

This comes as neighbors in the area become increasingly concerned with the recent spike in violent crime.

Multiple sources from ABC7’s Dion Lim say the robber who was shot and killed was 21-year-old Samuel Jessop-Burciaga, also known to his friends and family as “Sammy.” It was he and another robber who tried robbing the Asian man.

During the struggle, the Asian man wrangled a gun away from Jessop-Burciaga and shot him in the face. Jessop Burciaga fell on top of the Asian man and the other robber fired multiple shots.

According to ABC7, the person being robbed was injured in the legs, Jessop-Burciaga was shot dead, and the second robber got away. Earlier reports of the Asian man killing one and wounding the other robber were wrong.

“I was helping a customer and we heard four shots and then we started seeing police cars. So I stepped outside and saw the paramedics doing CPR on somebody,” stated area worker Lydia Louie.

People working at shops on the street said they knew the man who was shot in the legs and sent to the hospital, reports KPIX5.

NYC ‘Duck Sauce Killer’ to be Released on $500K Bail

“I come out, my manager was like, ‘Those weren’t gunshots. This is Haight Street. Nothing bad like that happens on Haight Street.’ I walk down the street, I see two bodies on the floor,” stated another witness.

According to local freelance writer Susan Dyer Reynolds, the 18-24-year-old shot in the face during the attempted robbery was arrested on October 9, after a pursuit with SFPD. They recovered over 10 backpacks and belongings from multiple break-ins. District Attorney Chesa Boudin released him. “Now he’s dead.”