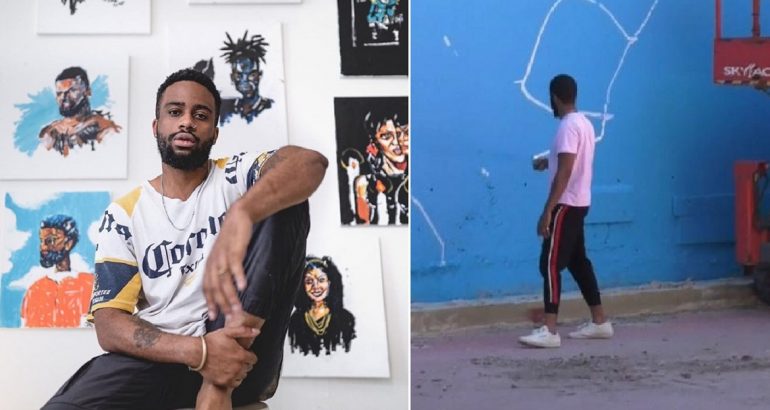 A battle is brewing over a mural in the heart of Calgary’s Chinatown in Alberta, Canada. Painting has already begun on the brick wall of a private apartment building in Chinatown’s version of Heritage Park. The project is funded by radical Mayor Naheed Nenshi who paid Pink Flamingo, a Black Lives Matter surrogate, $120,000 to paint the mural.

Organizers at Pink Flamingo sought little input from the Chinese community about the contents of the mural and decided “celebrating blackness” was more important than the feelings of Chinatown.

“How does it relate to the Chinese community?” Tony Wong, President of the Calgary Chinese Culture Centre shockingly asked after seeing the outlines of a black cowboy (John Ware, a black cowboy who settled in Alberta).

“In this particular case it was literally one step out of place by painting the backdrop the day before the public consultation and then not having the chance to speak to the artists to say, ‘Hey, how does this work and how does our culture fit into this equation, so it is a bit disappointing,’” Terry Wong continued to explain.

“It’s not that the Chinese community is anti-Black, there is a relationship we’ve had with the Black community but the mural itself doesn’t say that at all. It was intended for someplace else, if they had actually had the artist speak to the Chinese community, take our design into consideration, maybe a frame of bamboo around. It’s just plunked here is how I feel,” Dale Lee Kwong, advocate for the Chinese community explained to CTV News.

“Why can’t I just paint black people on the wall without people getting up in arms about it?” asked Jae Sterling, the artist of the future Chinatown John Ware mural.

John Ware was a black cowboy who settled in Alberta, Canada in the late 1800s, and Black Lives Matter feels it is more important than the 600 Chinese who died building Canada’s railroads. Slavery was outlawed in Canada before the 1800s and no slaves died in Canada.

A mural of an African woman spreading her legs and showing her vagina was supposed to be painted over the famous Wings to the Dream mural done by Calgary artist Doug Driediger in 1995, which was painted outside of the downtown Calgary Urban Project Society building. Residents became so angered by that idea, Black Lives Matter surrogate, Pink Flamingo decided to paint the mural in Chinatown instead, according to Western Standard.