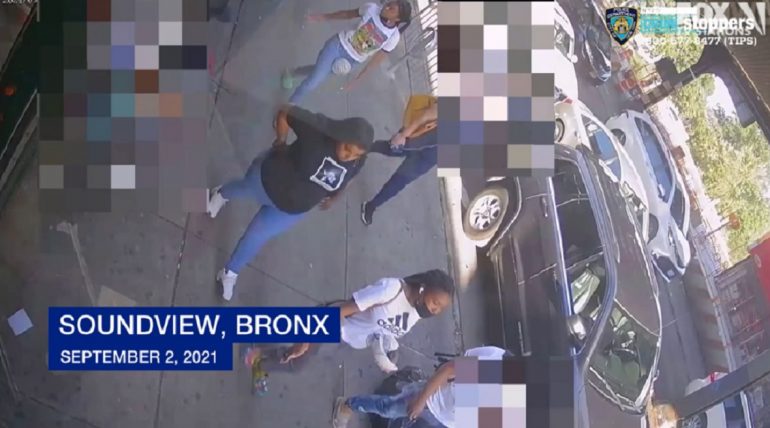 The violent confrontation happened around 5:40 p.m. inside Estefy Nail Salon on Westchester Avenue on Saturday, September 2, 2021.

According to the NYPD, the women verbally fought with the nail technician about her service and then started attacking her.

“The female individuals then grabbed a gel nail lamp and as they were exiting the store one of the females bit the victim in her right hand, stunned her right arm with a stun gun and began punching her multiple times in the face when she attempted to stop them from leaving with property,” the NYPD stated in a press release.

The four women got away before police could arrive, however, authorities obtained security footage showing them walking on a sidewalk after the attack, according to FOX5.

The salon employee was taken to Jacobi Hospital in stable condition.

Woman #1 is described as a medium-skinned female, with black hair and braids and last seen wearing a white Adidas t-shirt, gray sweatpants, multicolor sandals, a black face mask, and carrying a black purse.

Woman #2 is described as a medium-skinned female, with black long hair and last seen wearing a black t-shirt with a white picture in front of it, blue jeans, and white sneakers.

Woman #3 is also described as a medium-skinned female, with black long hair with braids and was last seen wearing a white t-shirt with cartoons drawings in front of it, blue jeans, green crock sandals, and carrying a gray round purse.

Woman #4 is described as a light-skinned female, with black hair in a ponytail and was last seen wearing a long-sleeve white shirt with dark blue and burgundy stripes in front of it, black pants, black sneakers, and carrying a black purse.