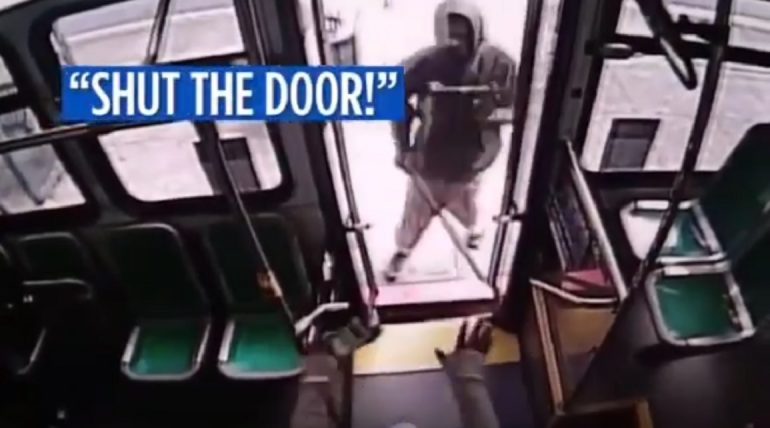 OAKLAND, California—This attack happened on April 26, however, the Good Samaritan is speaking out about the incident after being recognized by the community.

The Good Samaritan, who only wants to be identified as Mychelle explained, “I wouldn’t sit there and watch anyone get hurt.” Mychelle works in the nonprofit sector and is used to helping people.

She not only steps in to shield Mr. Lin from the cane blows but also presses the assailant against the Plexiglas barrier at the front of the bus and taking a photo of him with her smartphone.

The bus footage also shows Mychelle jumping off the bus and chasing the assailant down and then flagging down an ambulance. Within seconds after that, we see her being hit multiple times by the assailant before he flees the scene.

The very same day 69-year-old Hua Lin was recuperating at the local hospital, Oakland Chinatown Chamber of Commerce President Carl Chan was actually on his way to visit Lin when he himself was viciously attacked by another African-American male.

After learning of what Mychelle did, Chan invited her to drink boba and had nothing but positive things to say about her, according to ABC7.

“She is not only courageous but someone with integrity,” said Chan.

Chan is starting a fundraiser to express his gratitude and to help keep Mychelle safe.

The GoFundMe page for Mychelle can be accessed by clicking HERE

“For any landlord or manager if you know of a place where she can stay, please contact the Oakland Chinatown Chamber of Commerce,” Chan stated to ABC7.

“It doesn’t matter who we are, Black, Asian, white, Hispanic, whatever race. We need to unite and work together to fight COVD-19 and fight hate. I hope many of us will step up in recognizing our bus hero,” said Chan.

Just don’t call Mychelle that to her face.

“That’s what you’re supposed to do. I don’t know how else to say it,” said Mychelle.