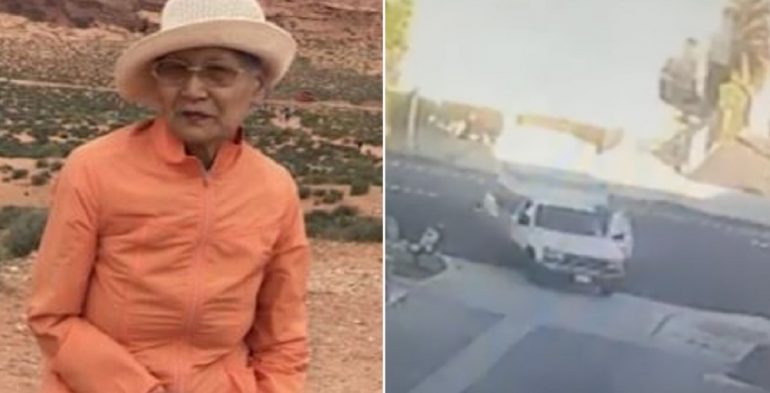 LOS ANGELES, California—The LAPD is looking for a driver who backed over a 91-year-old great-grandmother, then got out and looked at her dying body on the ground before taking off, according to ABC7.

Family members identified the victim as Soon Kim, a mother of two and grandmother of five who lived in the neighborhood near the alley. Kim also had two great-grandchildren, reports ABC7.

“To die in such a horrific way, we were expecting the call at 91 years old that she had died peacefully in her sleep. To get that call (instead) is truly heartbreaking,” Henderson continued to state.

Footage shows Kim walking with the aid of a walker across the entrance to an alley on Ellendale Place around 7 a.m. Monday before the driver of a white truck backs into Kim.

The truck appeared to be loaded with machinery, possibly furniture as well. The driver apparently did not see Kim. However, once realizing Kim was struck—the driver quickly fled the scene.

Los Angeles Fire Department paramedics responded to the scene and brought Kim to a nearby hospital where she succumbed to her injuries.

Kim immigrated from South Korea and loved America, her church, and playing bingo. She was widowed at 25 and raised her two children on her own, according to ABC7.

“It was true grit,” Henderson said. “She really had a tough life. Her perseverance through life inspired all her children and her grandchildren.”

Kim’s family is begging the driver to turn herself in or any witnesses to come forward.

A reward of up to $50,000 is available for information leading to the driver’s arrest and conviction.