Woman Attacks Store Owners After Her Credit Card is Declined 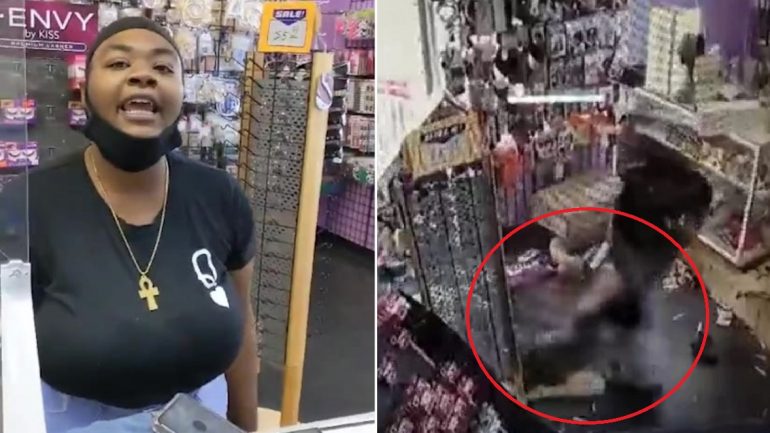 CLEVELAND, Ohio—Husband and wife store owners of a beauty supply store are recovering from their injuries after being brutally beaten by an angry female customer who had her pre-paid debit card declined, according to FOX8.

The attack happened at Chic Plus Beauty Supply store in Lorain Avenue around 5 p.m. Friday.

“May I please have my items, please? I will leave and get out of your hair. You will never see me in your store again,” the unidentified African-American woman can be seen saying on smartphone video captured by one of the owners.

The female customer did not understand why she wasn’t allowed to walk off with merchandise even though her debit card was declined.

“All I’m trying to do is get my items, that’s it. I’m not being belligerent,” the customer continued to tell the owners.

One of the owners replied, “We cannot give you anything because it’s not cleared.”

That answer didn’t sit too well with the customer because she goes absolutely ballistic. The customer can be seen on surveillance footage viciously attacking both husband and wife, knocking them to the ground, knocking over display cases and merchandise, and at one point, dragging the wife across the floor by her hair.

“Watching your parents get thrust around and dragged around the store they worked so hard for…I couldn’t finish watching the video obviously,” said David Jo, the owners’ son.

Jo’s parents are originally from South Korea and have lived in the Cleveland area for the last 25 years.

“My father explained it to her very clearly that the reason you’re not able to walk out with the product is…There’s no money in your account. The card was denied, therefore, obviously, you can’t take the product out of the store and that seemed to set her off,” Jo stated to FOX8.

Jo told FOX8 his family has operated the store on Lorain Avenue for about five years and although they’ve dealt with irate customers, they’ve never experienced anything this extreme.

“I just saw my mom today since it happened and she’s all bruised up, her hair’s been pulled out, she has bruises all over her body…My dad’s mouth was all bloodied up,” Jo explained.

Cleveland police are actively pursuing all leads to find the suspect. She will be facing felonious assault and vandalism charges once she is apprehended, and hate crime charges may also be on the table as well.