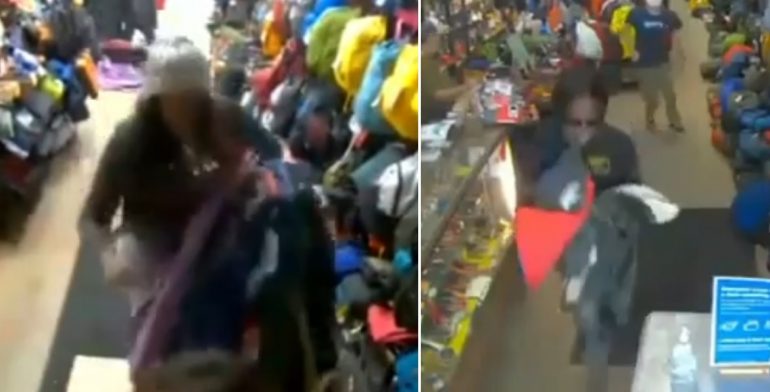 BERKELEY, California—Young’s Backpacking and Mountaineering has been in business for over 40 years. Back in 2019, the local store made headlines when surveillance footage captured three African-American women running out with $10,000 worth of merchandise. Young’s has been targeted again.

This time, another African-American woman came into the store and ran off with a bunch of jackets, according to ABC7’s Dion Lim.

Family members of the 78-year-old store owner, Young Min, contacted Dion Lim and stated they’re fed up. “He is an elderly man and recently had health issues. This is not acceptable.”

Fortunately this time around, a pedestrian Good Samaritan helped catch the thief—who was later arrested.

Back in 2019, Young Min and an employee were violently steamrolled by exiting overweight robbers. “I’m pretty upset. They had come in and attacked my dad and so that’s very personal to me,” Roy Min, Young’s son stated to KRON4.

“This is a small mom and pop store we do our best to I guess survive and so $10,000 is gonna impact us,” Roy continued to state.

Dion Lim explained she continues to receive messages from business owners and homeowners who were vandalized or targeted by thieves.

“Black people have suffered enough. We’re always villainized and stereotyped and followed around in stores. Releasing these stories only perpetuates ‘anti-Blackness’ and it needs to stop,” one African-American commentator vehemently stated online.

According to the World Socialist Web Site, about 49 percent of Generation Z supports Marxism in the United States as of September 2020.

“There is no such thing as stealing. We’re redistributing white privilege to their victims,” a Generation Z netizen wrote.

“Whites and Asians have an unfair monopoly in capitalism and their dominance is perpetuating white supremacy and systemic racism. My phone shouldn’t only be an iPhone or a Samsung. There should be African choices. My car shouldn’t be a Tesla or a Toyota, there should be African choices. The destruction of the current capitalistic system must be our main priority so that we can curb white supremacy. Only then will Black people truly be free and finally innovate without White or Asian interference,” one Marxist wrote.