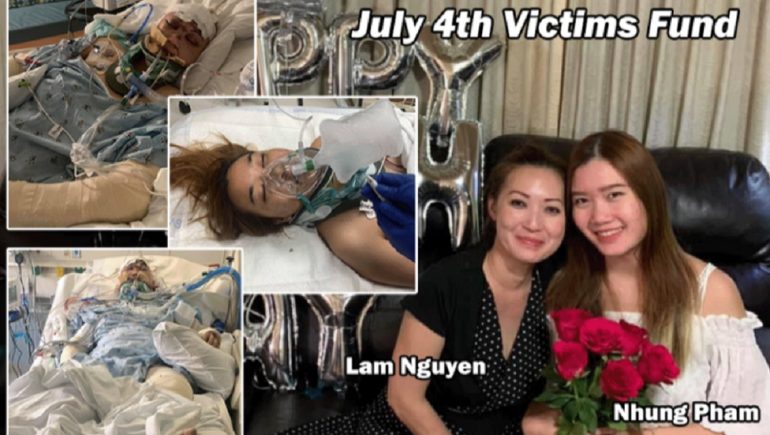 This is taken directly from their GoFundMe page, which can be accessed by clicking HERE

July 4th 9:40 pm, Anaheim – The nightmare for Nhung Pham and her mother, Lam Nguyen began, both remain in this nightmare and one, a mother who may not make it – permanently in a state of unknown, with her last visual being that of a car heading to her only daughter.

Instinctively, as a mother and any parent would do, she put herself in front of her child, absorbing, critically a great deal of the impact…crushing her arms, legs, breaking he neck instantly, and shattering her body.

This is the story of a mother and daughter, celebrating Independence Day, viewing fireworks that neighbors bring out every year, and also the many fireworks in the sky over Anaheim and Disneyland. This story and day however for Lam and her daughter, did not end with them celebrating freedom in America, but with both confided to hospital beds, critically injured due to the negligence of a driver who crashed into the family as they stood watching fireworks from the sidewalk in their neighborhood.

Multiple witnesses have come forward stating that a “lowered” pickup truck was driving erratically, doing “donuts”, “peeling” out, and/or doing “burnouts” before losing control and crashing into a crowd in which Nhung and her mother was standing with.

The unknown driver was detained, given a sobriety test which he passed, and released on the spot. His mother later speaking to local news reporters, stated that her son was shaken up, but was not at fault for the incident and was driving his pickup truck down the road when the axle broke which caused the truck to lose control crashing into the family.

When police arrived at the scene they found two female victims with “major injuries”. Both critically injured and transferred to UCI Medical Center in Orange.

The police report number is 21-96252. The officers at Anaheim Police Department are Serganet Steve Craig #S202 and Investigator Nathan Fay #538.

The impact was so hard that when her ribs broken they ended up puncturing both her liver and kidney. She is alert, in very bad shape, and has gone into surgery multiple times.

Lam Nguyen (44 years old)  cannot breathe on her own. The nurses described her as simply having her entire body broken. Multiple skull fractures, both arms broken, both legs broken, neck broken, and nearly every part of her body was broken in the crash. The doctors performed emergency surgery on her today, the outcome is unknown. Other known injuries…

We are still unsure if she will live or die.

Nhung and her mother immigrated to the United States from Vietnam in 2010, seeking a better life. Ironically, her father who was here, and saved enough money to bring them over, stated that they would be safer in America because the traffic in, “Vietnam is too dangerous”. Lam, her mother works full-time at a factory/bakery. Her father works an office job. Nhung is a full-time student at Cal State Long Beach (3.9 GPA) and both her mother and father work to support her as she attends school, achieving her dream of attending medical school, and ultimately becoming a doctor.

I have known Nhung for several years, as a long-time girlfriend of my nephew (who contacted me as this happened), she is almost a part of our family, and is at my home for holidays and family events. She is extremely kind-hearted, soft-spoken, and the type of person who is polite and respectful. It is with great sadness that I write this and make this campaign in support of someone close to our family.

This fund is being set up to support mother and daughter during this difficult time and to help with needs not covered by insurance, and beyond. 100% of the funds with go to Nhung and her family. Any donation is appreciated, even just $1, just knowing the support and thought will most definitely bring cheer to the situation. Outcomes are unknown at this time, we can only hope and pray for the best. The road will to recovery is long for all regardless of what happens, thank you for your love and support in advance.