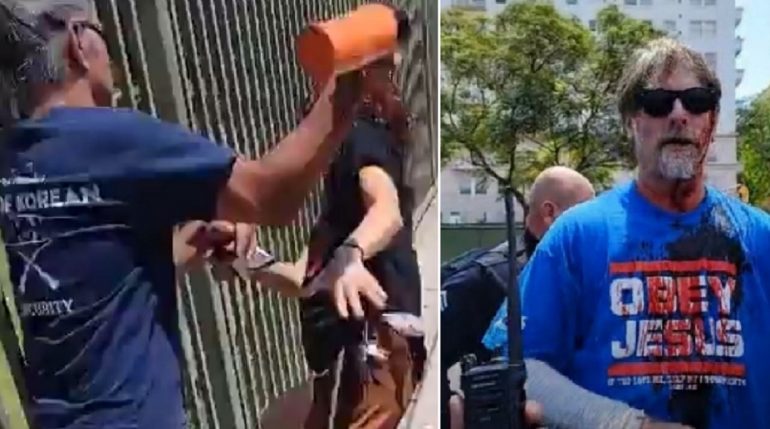 KOREATOWN, Los Angeles—Antifa demonstrators over transgender rights clashed with counter-protestors in Koreatown on Saturday, which was sparked by a viral video of a woman upset that a trans woman disrobed and showed his penis in the women’s section of a popular spa.

Footage showed multiple skirmishes between both sides—shoving, kicking, sucker punching, and stealing protest signs away. One side was heard yelling things like “Go home trans-phobe!” “There is no such thing as male or female, sexual identity is a form of white supremacy,” and others saying “save our children.”

About five people were injured: Three subject to assault and battery charges, while two were assaulted with a deadly weapon, according to the LAPD.

The investigation is ongoing.

The bulk of the protest began in front of Wi Spa, located at 2700 Wilshire Blvd. in Los Angeles’ Koreatown. A neighborhood that was heavily damaged back in the 1992 riots and was rebuilt with Korean money after the city refused to take responsibility.

Koreatown now is a shining example of a first-world city like Seoul, South Korea—while other parts of Los Angeles resemble 3rd world poverty.

Almost a week ago, a video spread like wildfire, showing a woman confronting an employee at Wi Spa because a transgender man exposed his penis in the women’s section of the spa.

“He is a man,” the woman customer repeatedly said. “He is not female, sweetie…There are girls down there, other women, who are highly offended (by) what they just saw and you did nothing. Absolutely nothing. In fact, you sided with him.”

However, Wi Spa was actually following California law, which prohibits discrimination based on “gender expression.” They either make the complaining customer happy by kicking out the transgender man and then get sued by the transgender man or they defend him.

A Wi Spa employee chose to defend the transgender man and now faces an onslaught of protestors who rightfully believe a male is a male and a female is a female. This is Wi Spa’s Kobayashi Maru (no-win scenario).