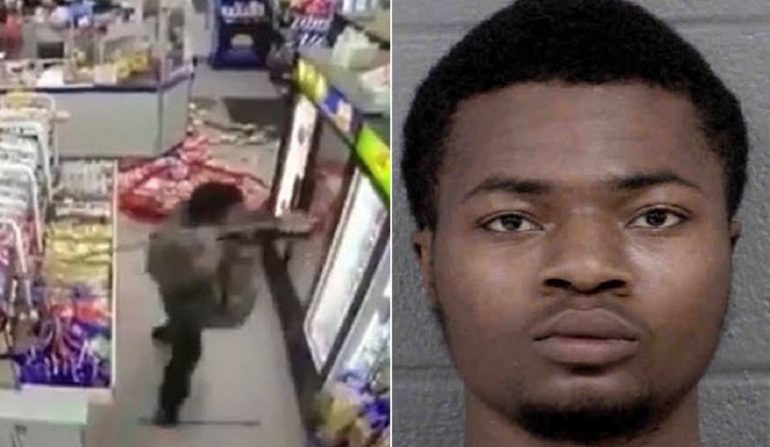 CHARLOTTE, North Carolina—Some may recall an irate customer smashing and trashing the Plaza Sundries convenience store in the Charlotte Transit Center back on March 30th. The incident was captured on camera.

Police later identified and arrested 24-year-old Xavier Woody Silas for the crime. Silas screamed racial slurs and used a metal pole to smash through glass and rip down racks. The store owner’s son, Mark Sung, believes Silas was hired by a man his family banned from the store in an act of revenge.

“As he was doing it, he was like saying racial slurs, cursing at us, threatening us. And the guy that we banned ended up coming into the store cheering him on and screaming, ‘That’s what you get! That’s what you get! Go back to your country!'” Sung said.

Silas is facing a litany of charges from damage to personal property, communicating threats, and disorderly conduct to Misdemeanor Ethnic Intimidation under North Carolina’s hate crimes statute, according to ABC11.

On Tuesday, May 25, less than two months later, Plaza Sundries found itself being attacked again.

A male customer became irate he could not afford a pack of cigarettes and repeatedly slammed a sheet of plexiglass with his fists until it shattered, screaming racial slurs and obscenities as he pummeled the protective barrier, according to TIME.

The customer entered the store with a Bible and tried paying for a pack of cigarettes with 50 cents. When the Sungs refused, he tried offering $1 for the pack. When Joyce Sung returned the customer’s money, he put down his Bible and started bashing the plexiglass

Sung’s mother, 63-year-old Joyce Sung, was hit by a piece of plexiglass, which caused her to stumble back. She sustained a bruise on her forehead and a cut on her finger. “It hurts every time I blink my eye,” she says. “I was shocked at first, but I’m fine now.”

Mark Sung says his family created a formula to follow when a situation escalates.

“Knowing that we’re going to get cursed out every day while we’re getting ready for work is just… we don’t know what words to use,” Joyce Sung says.