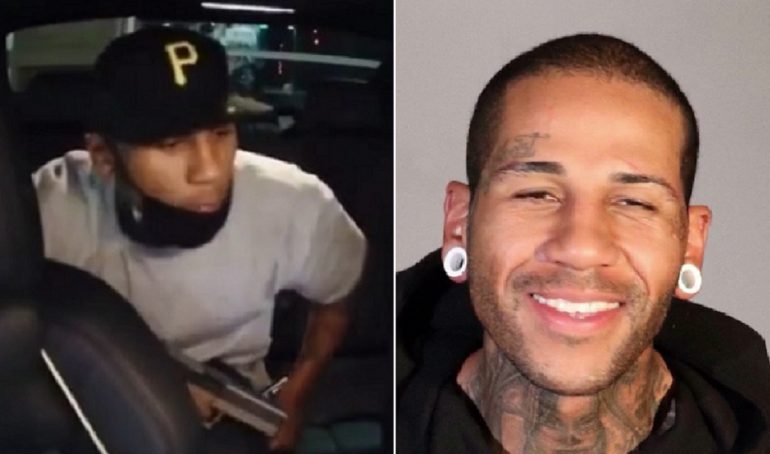 SOUTH EL MONTE, California—A Lyft driver sitting in his car at an ARCO gas station on Rosemead Blvd was beaten and robbed at gunpoint; the entire incident was captured on video.

67-year-old Paul Lao was refueling and washing his vehicle when a Latino man entered his rear passenger door and pointed a gun at him demanding he hand over his wallet on May 10, around 9 p.m.

The video shows the armed suspect stealing Lao’s smartphone and cash. According to Lao’s daughter-in-law, he had about $1,560 in his pocket at the time.

The suspect, now identified as 26-year-old Dandre Lorenz Powell of Downy was arrested on Tuesday, May 18 in Paramount with the assistance of the U.S. Marshals Service, according to KTLA5.

“This individual is a very very dangerous person, he has a long criminal history of violence,” Detective Sergeant Richard Lewis said during a news conference announcing the arrest Thursday. He called the attack “brazen” and “horrific.”

67-year-old Liao suffered facial trauma and was hospitalized. A GoFundMe account started on his behalf raised over $32,000 in less than a week and was eventually closed due to overwhelming support.

Powell has been charged with one count each of first-degree robbery, victimizing an elder individual in a violent crime and two counts of felon in possession of a firearm. His bail was increased to $2 million.

However, detectives who recommended Powell be charged with a hate crime, stated Los Angeles County District Attorney’s Office declined to file them.

According to a Recall George Gascon campaign, Powell should be facing his third strike and get 25-30 years in prison, but he will likely be released in about five years. Authorities stated Powell will be re-released from prison during his “peak” criminal years instead of being behind bars for a long time.

“Since being elected, Los Angeles County District Attorney George Gascon has abandoned crime victims and their families. Gascon has disregarded the rule of law and weakened lawful sentencing requirements for the most violent criminals, including murderers, armed robbers and rapists. George Gascon’s new policies treat career and repeat violent offenders as if they had never committed a crime, ignoring public safety laws approved by the people. Gascon has even reduced sentences on hate crimes, gun crimes, and gang crimes. On behalf of crime victims and their families and in the interest of public safety, we are urging Los Angeles voters to recall District Attorney George Gascon.”