The Mexican Chinese Massacre of 1911 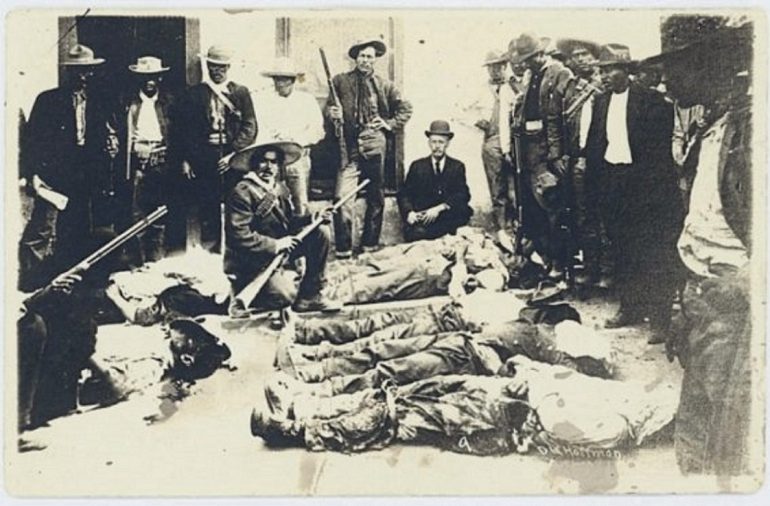 The massacre Mexico tries very hard to forget. On May 13, 1911, during the Mexican Revolution, advancing rebel forces entered the city Torreón as federal forces abandoned their positions.

As the rebels entered the city, they were welcomed by thousands of locals who were fired up by racist speeches and anti-Asian sentiment. According to historical data, a local herb-seller clinched a Mexican flag and screamed: “Let’s kill the Chinese!”

Revolutionary Commander Benjamin Argumedo is believed to have fired the first shot. Over the span of 10 hours, Mexican citizens looted and destroyed Chinese-owned businesses from banks to bathhouses and dragged their once Chinese neighbors by their queue’s (long braided hair), and trampled them to death with horses. Over half the city’s Chinese population were murdered.

“Argumedo gave the order to kill the Chinese,” stated Julián Herbert, historical author of the massacre. “But everyone joined in the killing. It was soldiers, men, women—everyone.”

A total of 303 Chinese and five Japanese immigrants were viciously murdered to what is known today as the Massacre of Torreón, a railway town about 500 miles south of the U.S. border.

According to The Guardian, the rebels and locals posed for photographs with the dead bodies before hauling them away in carts.

The Torreón Massacre caused outrage in China and Mexico eventually agreed to pay 3.1 million pesos in gold as reparations. However, China at the time was a European and Japanese colony and Mexico felt China “couldn’t really do anything,” therefore, payment was never made.

The anti-Chinese sentiment was very strong in North and South America during the late 19th and 20th centuries with the United States enacting the Chinese Exclusion Act, which banned Chinese immigration into the country. Mexico also enacted policies that led to the expulsion of all Chinese citizens in the 1930s.

Torreón is never mentioned in Mexican history because it shows the hypocrisy of Mexican immigration policies and destroys their narrative that they are always the victims. They never apologized for the massacre and never made reparations to the Chinese government as promised.

A commemorative plaque was later placed in the city but was swiftly stolen by the locals. A statue was erected in a public park back in 2007, however, the statue was vandalized multiple times and later removed.

A Korean-American Tragedy in Washington

The mass graves of the Chinese victims remain unmarked and some have been covered by a road and a playground.

“This matter of the Chinese killings makes us confront a truth that we haven’t wanted to talk about locally,” said historian Carlos Castañón to The Guardian, who oversees the municipal archives.

We are now seeing systematic attacks on Asians in America once again. Our meritocracy has been stripped and we’re told we have no rights because we’re “too successful.” Is it only a matter of time when we start seeing Democrat automobile union members attacking and beating us to death like Vincent Chin because they’re jealous of our success?