QUEENS, New York—An irate motorist was caught on camera brutally punching out a father and son before driving off with their wallets and cell phones because of a minor fender bender, according to the Daily News.

“Give me some money or I’m gonna f**k you up,” the driver screamed before knocking out 55-year-old Mohi Ahmed on Saturday around 7 p.m. in Jackson Heights.

Police say the attacker drove down 70th St. in a grey Honda Accord when the driver of a white Nissan Sentra (Adel) pulled out of a parking spot near 32nd Ave and accidentally sideswiped the Honda.

The Honda driver immediately slammed on his brakes, threw open his car door, and immediately confronted Ahmed and his 23-year-old son, Adel in the Nissan, demanding money to cover the damages, according to the police.

The Accord driver’s girlfriend tried to calm him down but to no avail. The Accord driver threw a few punches and knocked Ahmed out cold. The assailant then directed his wrath toward Adel, who had been driving the Sentra.

The assailant began punching Adel multiple times but Adel managed to stay on his feet, which enraged the Accord driver even more. Surveillance footage shows Adel eventually getting into the fetal position against a car and protecting himself from multiple punches.

The assailant eventually stopped attacking the two South Asian males and decided to take their wallets and smartphones instead. In all, the assailant got away with two Samsung phones, Ahmed’s wallet, which contained his ID and ATM cards.

Adel Ahmed is a civil-engineering student and told Daily News he and his dad were leaving TD Bank on their way to get something to eat after fasting for Ramadan.

“When I was trying to get out of the parking lot, I didn’t notice that there was a car coming,” Adel Ahmed said. “All of a sudden, I move forward and my car scratched the entire front passenger’s side of his car.”

Accidents do happen and the father and son were expecting to exchange information for insurance purposes but got beat down instead.

This attack is eerily similar to a Thai woman who was randomly punched in the face by an African-American male who was actually angry at a different woman but decided to take out his anger by punching a random Asian woman on a scooter.

Thai woman randomly punched earlier this year for being Asian in New York. 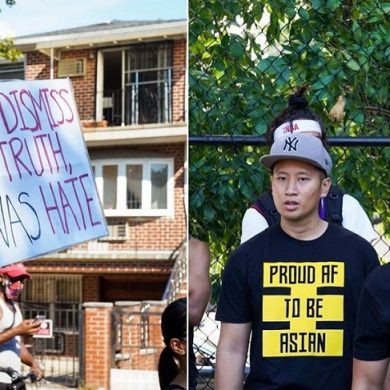