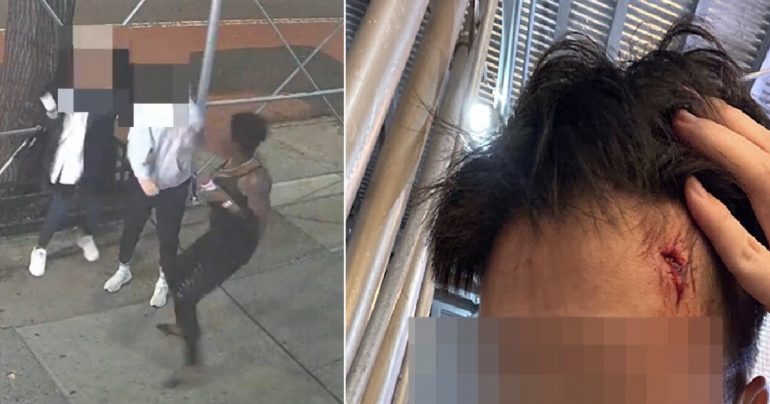 HELL’S KITCHEN, Manhattan—Authorities are looking for an African-American woman with a wig who attacked an Asian woman with a hammer Sunday night around Times Square.

According to ABC7’s CeFaan Kim, the 31-year-old recent FIT graduate was walking with her friend to the subway station when she was viciously attacked by an African-American woman. The friends thought they would be safer traveling in pairs.

The African-American suspect struck the Asian woman in the back of the head with a hammer, causing the victim to collapse and dropping her bottle of wine she was carrying.

Her blood has since washed away, but the wine still stains the sidewalk, according to ABC7.

The frightened women managed to disarm the attacker and also caused her to drop her wig. The pair then managed to run and get help.

The victim, who only wants to be identified by her first name, Theresa, told ABC7 her physical pain doesn’t compare to the psychological scars. She is absolutely traumatized by the attack and still in total shock.

“Some person came along and hit another person over the head with a hammer,” café owner Steve Olsen stated. “And there was blood all over the place.”

Olsen stated the stunned patrons rushed to the Asian woman’s aid, picked her up, sat her down, and washed her off. She was visibly shaken and in shock.

Other outdoor patrons described the horrifying attack through Citizen App:

“A drunken woman hit them with a hammer in the head,” the witness wrote. “The perp, young fellow and his girlfriend, were walking down the sidewalk and she just came up screaming and hit them in the head. I saw it happen, with a hammer. She’s long gone.”

According to authorities, the Asian woman did not know her assailant and the suspect apparently told the Asian woman to take off her mask before attacking her with the hammer, cutting her on the side of her head.

“She was talking to herself, like talking to a wall, I thought maybe she was drunk or something, so we just wanted to pass through her quickly and when I passed through her, she saw us and said ‘Take off your f***ing mask,’ which is shocking,” Theresa said. “Suddenly I felt my head get hit by something.”

ABC7 reports the victim was rushed to the hospital and was in stable condition. She suffered a gash on her forehead—a deep wound on the left side of her head and needed seven stitches.

Theresa explained she came to New York in 2019 for her masters at FIT. She stayed with her parents during the pandemic and came back last month to start looking for work. However, her parents were concerned about the anti-Asian violence from the black community.

“My mom actually told me please be careful, there’s a lot of Asian crime happening in America,” Theresa said. After speaking with her mother, she’s deciding to go back to Taiwan for the time being.