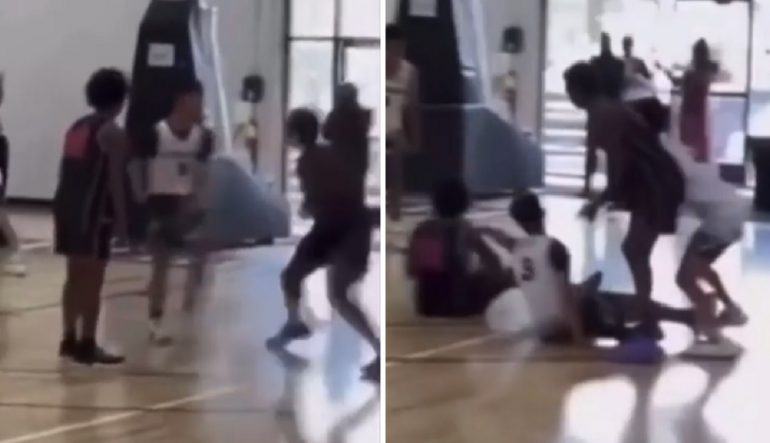 OAKLAND, California—A San Jose Asian-American teenager was punched in the head and allegedly called racial slurs during an Amateur Athletic Union Tournament basketball game on Saturday in Oakland, according to KPIX5.

The African-American players behind the physical attack were only reprimanded after several frustrated parents demanded something be done.

The physical altercation was caught on camera and was obtained by KPIX5. The footage shows Lennie and Eduardo’s son, Evan (last names are withheld out of fear of retaliation) at an AAU tournament game at the Soldiertown gym Oakland.

The video shows Evan trying to grab a loose ball before an opposing player reaches it. That player passes the ball to a teammate and then is seen pushing Evan. Evan can be seen getting back up and is then pushed back to the ground by a second opposing player standing nearby.

The players exchange words before Evan walks away and returns to the player, who then punches Evan in the head.

“Not one single parent stood up to go protect my son, I ran across the gym to get him,” Lennie said to KPIX5.

She continued to explain well before the punch, the other team—the San Francisco Generals—repeatedly called Evan and his South Bay Snipers teammates racial slurs used against Asians.

“Two-thirds of the team are Asian,” Eduardo said.

Other witnesses who did not want to be identified fearing reprisals from Oakland residents verified Lennie’s claim of racial slurs being hurled at the Asian team.

“Several of the boys said they were using a lot of profanity using the ‘B’ word using the ‘C’ word,” a witness named Olivia stated.

No one jumped in to stop the altercation and the parents said the director of the tournament initially refused to watch video of the incident.

“How was a technical foul not called when he was obviously punching him in the face?” Olivia asked. “They said, ‘Oh, we saw what happened,’ and I was pressing them because I said, ‘If you saw what happened, you should not let that go!’”

The punch left Evan with a concussion, according to his parents. What makes matters worse, no one condemned the physical and racial attacks.

“The worst part is no one apologized,” Eduardo said.

After several frustrated parents confronted the tournament director, they finally agreed the player who threw the punch would be banned for Sunday’s game. However, the player who initially pushed Evan was not pulled from the game.

“It just makes parents not want to pay all this money to put their kids in danger if they’re not going to be protected and be safe,” said Olivia. “That’s sad, because they love basketball.”

Evan’s parents say they plan to file a report with Oakland police.

One ex-resident of the area told Asian Dawn racial insults and physical abuse against Asian players have been happening for decades. “Asians and black people don’t mix. Now I live in Irvine. Black people are barely 1% here and notice there is nowhere near the attacks happening to Asians compared to other parts of the country.”

KPIX5 reporter Maria Medina tried reaching out to San Francisco Generals AAU via Instagram, but they’ve since deleted their IG page, which initially posted an official statement condemning the racial attack on a 14-year-old Filipino player. No doubt, their page was bombarded by thousands of angry netizens.