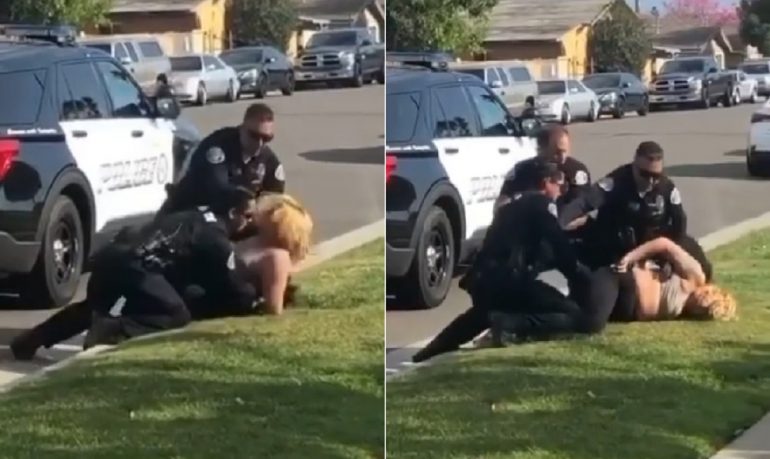 WESTMINISTER, California—A Westminster police officer has been placed on paid administrative leave after punching a handcuffed woman, according to CBSN Los Angeles.

Officers were called to the 14100 block of Locust Street for reports of an assault and battery on Wednesday, April 21, around 4 p.m.

34-year-old Ciomara Garcia was identified as the woman who allegedly assaulted the Asian woman.

According to police, a Latino woman allegedly assaulted an Asian woman who had tried to rescue a dog running in the street. Neighbors stated the Asian woman and Garcia exchanged words over Garcia’s unleashed dog, before Garcia put a hand on the woman’s arm.

“She basically put her fist on her arm but didn’t hit her, and that’s when the Asian woman left, and like 20 minutes later, came back with cops and live seven or eight cops showed up,” a witness aid to CBSN Los Angeles.

“She’s bipolar, she has schizophrenia,” said Adolpho Rosales, Garcia’s brother. “I think they could do a better job since they already have history with her, they already know her.”

During an investigation, officers handcuffed Garcia after discovering she had an outstanding felony bench warrant for vandalism. Police later stated Garcia “exhibited signs of being under the influence.”

Officers contacted the paramedics and while waiting for them to arrive on scene, Garcia “became combative with the officers.”

One of the officers, who has not been identified but is of Asian descent, punched Garcia twice in the face, according to the police department. Two other officers “immediately intervened and deescalated the situation.”

Sandy Armento lives across the street and captured the incident on her smartphone, which is now circulating on social media.

“They just, like, get her up and like they just push her back down,” she said. “I think she got hurt so she like started obviously being aggressive.”

Armento said the officer punched Garcia after she kicked him in the upper thigh after being pushed back down to the ground.

Garcia was taken to a nearby hospital for evaluation. She was not injured and was then booked into the Orange County Jail on the warrant. She is also facing assault and battery charges on the Asian woman, resisting arrest, assault on a police officer, and being under the influence of a controlled substance, reports CBSN Los Angeles.

The officer who struck her was placed on paid administrative leave pending an internal affairs investigation. The Orange County DA’s Office will evaluate the officer’s actions and decide whether or not criminal charges necessary.