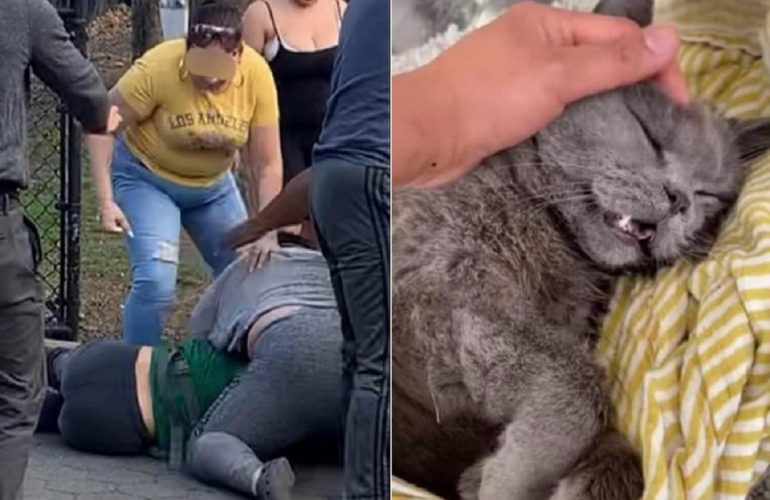 BROOKLYN, New York—An Asian woman and her boyfriend are finally speaking out about a cruel family who attacked their pet cat with blows that ultimately led to its death on Easter Sunday, according to Newsweek.

ChaRee Pim wrote on her Facebook page on Monday, detailing what happened to her friend, now identified as Suchanan Aksornnan, also known as Chef Bao Bao on Instagram.

Pim wrote the couple took their dog, two cats, and a bird on an evening stroll on April 4 in a Brooklyn park when a random boy approached them. The boy—who looks like he was around 12-years-old—“snatched and pulled the [cats’s] leash up…into the air” before dropping the cat.

The cat named Ponzu tried getting away but the boy allegedly stepped on the leash.

However, Ponzu still managed to get away, but when the couple realized his back was bloodied, they turned their attention to the suspect.

The boy ran to his family and began acting like the victim, according to Pim. The boy’s mother began verbally harassing the couple.

Pim then explained the family began physically assaulting the couple and their pets. “Everything happened so fast!” she wrote.

“The family not only did not offer any apology nor remorse,” Aksornnan told the outlet. “They immediately began a verbal abuse which escalated into a physical assault. I got punched and kicked by three women.” Her boyfriend sustained a broken nose and needed surgery the next day, she added.

Ponzu’s official Instagram account confirmed he succumbed to injuries he sustained at the park and his preexisting heart condition on Easter Sunday. He was only three years old.

“We are traumatized, lost for words, heartbroken,” the caption read. “Our family got physically assaulted that day and there is a pending police investigation to find and charge the perpetrators who showed no empathy for animals nor humans.”

“The emotional stress and heartache from losing our beloved cat is tormenting us to this day,” Aksornnan told Greenpointers.

The couple has filed an official police report, although Pim claimed in her Facebook post that over the two weeks since the incident, it has been passed to three different detectives, according to Newsweek.

Captain Kathleen E. Fahey with the 94th Precinct confirmed to Greenpointers that the case is currently “under investigation.”

“Anyone who may have witnessed the incident is asked to call the 94 Precinct Detective Squad, if they have not already done so,” she added.