Sen. Kennedy Rips Harvard For Being Racist Against Asian-Americans 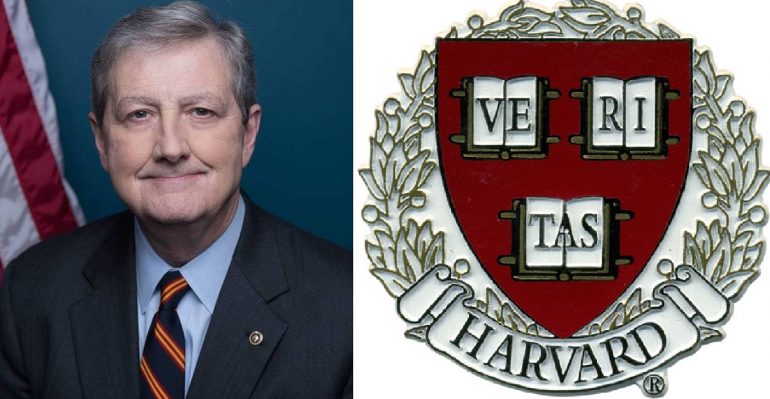 WASHINGTON, D.C.—Republican Senator from Louisiana, John Kennedy addressed the floor of the senate back in late March and used his time to show support for Asian-Americans; something many news outlets did not cover because he is a Republican.

Sen. Kennedy started off his speech with, “Mr. President, I’m sure you’ve been to Paris. The architect as you undoubtedly know, Mr. President, who designed the Louvre’s iconic glass pyramid was actually an American. He was an Asian-American. His name was I.M. Pei.”

“Mr. Pei immigrated from China to the United States in the 1930s. By the time he passed at the age of 102, he had designed a number of famous buildings, including the John F. Kennedy library. America is proud of Mr. Pei. He is just one of millions of Asian-Americans whose talents have helped America continue to be an exceptional nation.”

Sen. Kennedy continued to state, “The contribution of individual Asian-Americans have helped our country pioneer and you know this, Mr. President, pioneer advances in architecture and medicine, in art, and technology but more than that, Asian-Americans are our friends and they are our neighbors.”

“The recent murder of Asian-American women in an evil assault in Atlanta was an assault not just in the Atlanta community but on the United States of America.”

This is where things get interesting. Sen. Kennedy starts ripping President Biden, “President Biden’s rhetoric and defense of the Asian-American community is not altogether matched by respect for the right of Asian-Americans to reap the reward of their talent and grit.”

“The Biden administration decided to stick its head in the sand of some of America’s top universities, actively discriminating against Asian-Americans.”

Sen. Kennedy continues to point out establishments like Yale University discriminated against Asian-Americans on the basis of race and not on the basis of qualification. The Justice Department sued, however, a few weeks after taking office, the Biden administration withdrew DOJ’s own lawsuit against Yale.

It seems the Biden administration will give the Asian-American community the optical illusion he’s on their side, but his policies and actions speak louder than his words.

Biden is extremely racist against Asian merit and believes merit is a form of “white supremacy.” Perhaps future generations of Americans will blame Asians for buying up and owning 90% of their greatest corporations and make us out to be “white supremacists,” for their own failures. There are definite signs some Americans are already thinking that way.