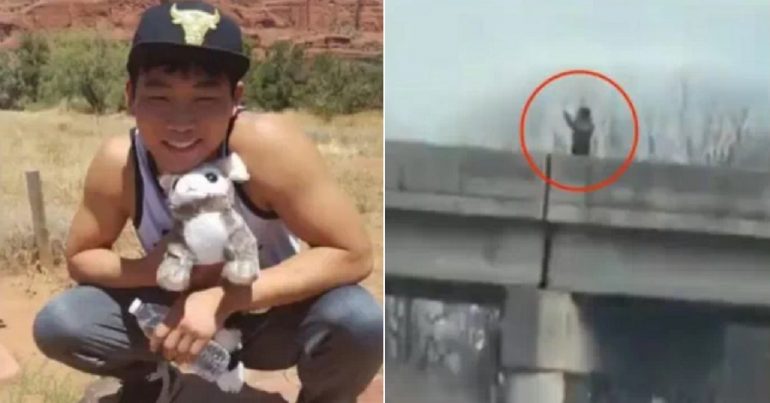 MONROE COUNTY, Pennsylvania—Asian-American Christian Hall, 19, was shot and killed by state police in December. His death has been ruled justified by the Monroe County DA on Tuesday, March 30, according to PA.

The series of events started with an anonymous 911 call on December 30. Upon further investigation, the 911 caller was actually Hall himself. Operators tried calling Hall back, but he didn’t answer.

Police responded to the scene on state Route 33 South at I-80 and found Hall standing on top of the concrete safety barrier.

“Come off, we can talk,” a police officer can be heard saying in smartphone footage. “Something could be in his left hand Corp.”

What officers believed to be a pistol was later revealed to be an airsoft pellet gun made to look like a pistol. Officers were able to negotiate with Hall, persuading him to put down his weapon. But he later grabbed his pistol and placed it in his waistband.

Hall then continued to walk 90 feet toward officers.

“He doesn’t jump, but he waits after he calls 911 for the troopers and at all times he acts like that gun he has is real and they certainly believe it,” First Assistant District Attorney Mike Mancuso said to PA.

Police stated Hall then grabbed the gun from his waistband and took a step toward officers. One officer fired several rounds—no shots landed on Hall.

Hall can then be seen raising his arms to the side, turning the weapon sideways, rotating the barrel forward, and then pointing the gun above his head. At that moment, police began firing once again, killing Hall.

“The use of against Christian Hall, deadly force by Pennsylvania State Police was justified under the circumstances due to Hall’s actions which created a threat of death or bodily injury,” Mancuso stated.

While the Monroe County District Attorney’s Office says they don’t think policemen were at fault, they want to make sure Hall’s family doesn’t blame themselves either, reports PA.

“We’re sorry for your loss, we can’t imagine the impact that has had on you. We don’t believe you should blame yourself for anything, along the lines of what happened. CJ had a lot of mental health issues and in the end, they were too much for him,” Mancuso said.