OAKLAND, California—Two sisters visiting the Bay Area from Hawaii and Florida witnessed first-hand what they only heard about in the news.

From a second-story window, Tiffany Chuk and her sister Angela filmed an attempted robbery on their smartphone. The attack happened shortly after 7 a.m. on Jefferson Street near 10th Street, according to NBC Bay Area.

Tiffany Chuk explained the suspect drove in the wrong direction on a one-way street and backed into a parking spot. The suspect—described as an African-American male—then jumped out and attacked an Asian man.

“He jumped on him from behind, knocked him to the ground, and punched him in the head,” Tiffany said to NBC Bay Area.

While Tiffany was filming the incident, her brother immediately called 911 and her sister, Angela, banged on the window to distract the suspect and shouted, “We’re calling the police!”

The Asian man fighting back and Angela banging on the window and shouting about calling the police paid off because the suspect ran back into his car and drove away.

Tiffany Chuk currently lives in Hawaii and was visiting her brother, who just recently purchased a condo in Oakland. She reiterated the fact she’s in disbelief to have witnessed something she has only seen on the news, reports NBC Bay Area.

“This person could be my grandpa, my uncle, my dad. It’s scary and it’s sad violence should not be tolerated it needs to stop,” she added.

Hawaii is relatively peaceful when compared to Oakland, San Francisco, or New York. According to To-Hawaii, the island state is 38.6% Asian, 24.7% Caucasian, 10% Native-Hawaiian, 8.9% Hispanic, and 1.6% African-American.

Logically speaking, using the media’s “white supremacy” logic, there should be more violence toward Asians in Hawaii since the island is 24.7% Caucasian and only 1.6% African-American. However, there is less violence against Asians in the island state.

Angela Chuk, who lives in Orlando said that watching the attack made her question her own safety.

“As an Asian, as a young Asian female I want to take all the precautions I can,” Angela stated.

After the attack, the Chuk sisters said they helped the man who spoke only Cantonese and file a police report and handed over their recording, reports NBC Bay Area. 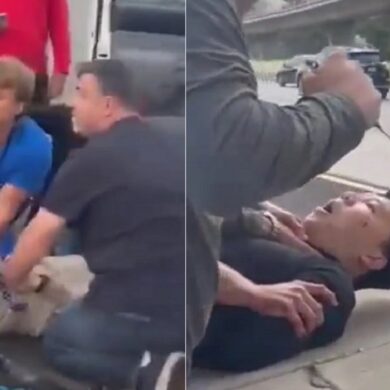