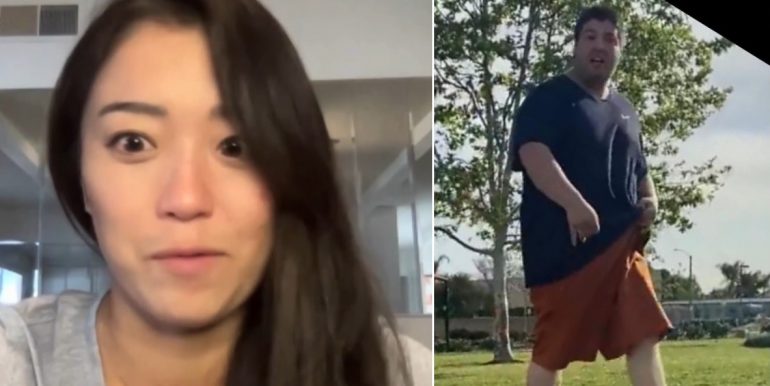 Sakura Kokumai, who is Japanese-American, stated her day started off normal as she frequently goes to the park to work out and prepare for the upcoming Olympics. However, things took a turn for the worse as a random man showed up and started screaming at her.

“He was basically just yelling stuff like, ‘Don’t talk behind my back. Why are you looking at my car?’” Kokumai told KTLA5. “So things like that that made me notice it could be something a little bit, I don’t know, off. So I let it be.”

Kokumai recorded the incident on her phone.

“Obviously I was scared,” she said. “I think in the video you can see I was kind of laughing but at that moment, you really don’t know what to do.”

At first, Kokumai didn’t understand why the man was targeting her but then as he got into his car—ironically a Honda Accord—she heard the racial slurs.

“I was aware about the anti-Asian hate that was going on. You see it almost every day on the news,” she explained. “But I didn’t think it would happen to me at a park I usually go to to train,” Kokumai told KTLA5.

Nearly all of the people in the park ignored the situation.

“One lady did come up towards the end, asking if I was okay,” she stated. “But until then, as he was walking up, yelling, there were people but they kind of kept to themselves the entire time,” Kokumai continued. “I thought what if this was my grandma or my mom? That scares me.”

“I do know the responsibility of having the platform and being an athlete representing the U.S. so I really thought it’s important to raise awareness,” she said. “This is happening. This is real,” she stated to KTLA5.

Kokumai has not reported the incident to the police because she is still processing what happened.