Harvard Tells Asian Students ‘You May Wish You Weren’t Asian’ 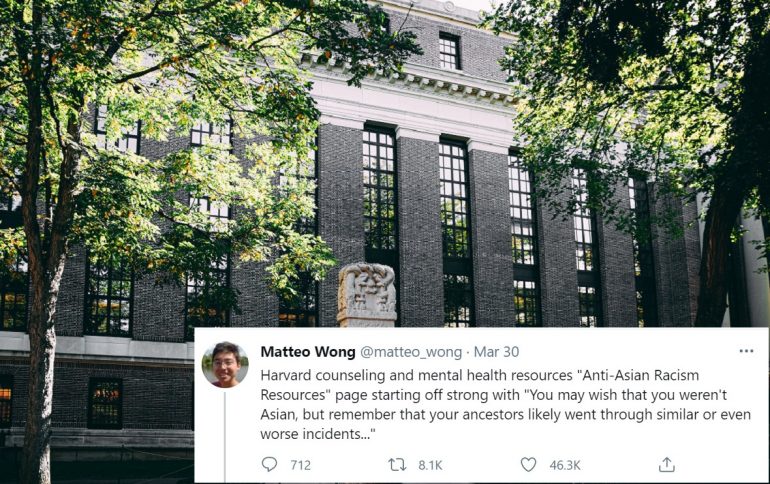 “When you experience racism, you can feel shame,” Harvard’s Anti-Asian Racism Resources page stated. “You may wish that you weren’t Asian, but remember that your ancestors likely went through similar or even worse incidents.” The message has since been deleted.

Matteo Wong, a Harvard student, took to Twitter to express his frustration with the school’s response to the increase in racism against Asian-Americans throughout the United States amid the pandemic and the mass shooting in Atlanta, Georgia earlier this month, which left eight dead—six were Asian women, according to Newsweek.

“WHAT? Please tell me who wrote “you may wish that you weren’t Asian” on the mental health resources page, why they thought it would be helpful, and how telling me this is supposed to help me feel any sort of racial “pride.” at that, pride in what, exactly?” Wong tweeted on Tuesday.

“Ouch. This is almost willfully terrible – from the stock photo tea/bamboo to the WTH does ‘wish you weren’t Asian’ mean?! It’s angering to read as it demonstrates lack of empathy & dedication to #AsianAmerican students,” Stanford psychologist Helen Hsu replied to Wong, reports Newsweek.

Harvard has had a long history of discriminating against Asian-American students. The school was recently forced to release an 18-year-old internal study after the Justice Department raided the Ivy League and discovered Harvard’s dirty little secret from 1995 to 2013, which showed Asian-Americans had the highest scores of any race in SATs. Harvard buried these findings, of course.

You can read the entire Twitter thread by clicking HERE

Those low-rankings are obviously racist because the proof is in the pudding. The world is going through a major semiconductor shortage and only one company has the technological leadership, prowess, courage, and respectability to deliver the best microchips, Taiwan’s TSMC. Intel is three-generations behind. So much for leadership.

If Asians lack courage and leadership, how did Japan’s Toyota single-handedly defeat the most diverse automobile companies in the world? Ford, GM, and now Italian-owned Fiat-Chrysler? How can a race of people be so dominating if they lack courage, leadership, and respectability?