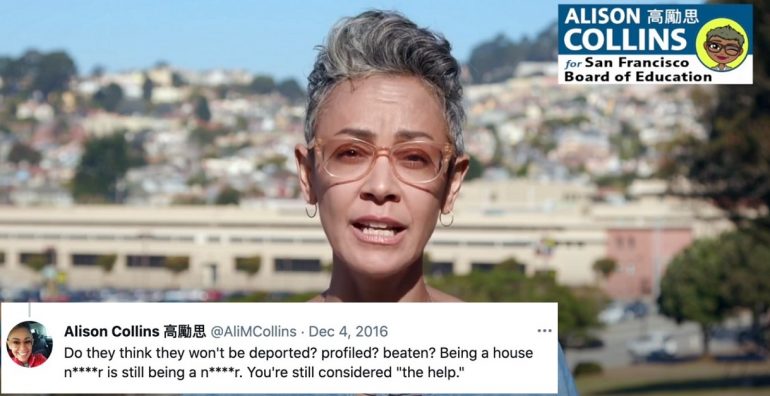 SAN FRANCISCO, California—A member of the San Francisco School Board recently made headlines when 2016 tweets surfaced of her referring to Asian-Americans as “house n****r[s].”

Well, it turns out the embroiled Alison Collins has filed a lawsuit against the San Francisco Unified School District and all but one of her school board peers for “purportedly infringing on her First and Fourteenth Amendment rights,” according to Mission Local.

The lawsuit itself is the work of three law firms and incorporates biblical scripture and inspirational quotes throughout. Mission Local pointed out the suit also recites a quote by famed Pastor Martin Niemöller regarding passivity in the face of Nazi atrocities.

Collins is seeking $12 million in general damages from “each” defendant, the school district—plus five board colleagues, plus another $3 million in punitive damages from each of her five board member colleagues. A total tally (plus fees and other miscellaneous charges) is $87 million.

Collins is the only Black woman on the board and feels Asians succeeding in America is because of white supremacist attributes and their dominance in higher education must be curtailed or “white supremacy” wins.

Lawsuit Against Boudin in Chinatown Attack is Looking ‘Shaky’

“How are Asians white adjacent? Look at where we are. Everything white people do, Asians do. They all control the corporate world together. They control big tech, the automobile market, the banking system; they’re essentially white,” the parent stated to Asian Dawn.

“Black people will always be at the mercy of white and Asian people until we take away the tools that make [them] powerful. Their companies, their technology, and their wealth and redistribute them to black people. I’m appalled my only choices in anything, including the phone I use is white-owned or Asian-owned and that’s not right. That very control is proof of white supremacy.”

The parent continued to state, “Reducing the Asian population in Lowell from 50% to 10% is the first step. Educated African-Americans can vanquish white supremacy and the white adjacency Asians share. Standardized tests have unfairly kept black students out of [these] specialized schools to further uphold white supremacy. What white and Asian people fear most is a dominant black corporate board in their companies because they’d lose control and they should lose control.”