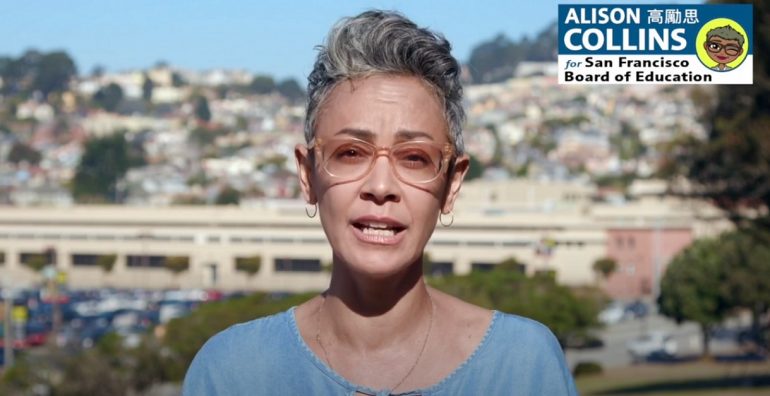 SAN FRANCISCO, California—A member of the San Francisco School Board referred to Asian-Americans as “house n****r[s]” in a 2016 tweet thread, in a comment highlighted by the organizer of a movement to recall her, according to the National Review.

“I even see it in my FB timeline with former HS peers. Their TLs are full of White and Asian ppl. No recognition #BlackLivesMatter exists,” she stated, before describing how her daughter had experienced Asian-American boys teasing a Latino classmate. “She spoke up when none of the other staff did,” Collins recalled. “The after-school counselor was Asian. :/”

Collins then demanded to know “[w]where are the vocal Asians speaking up against Trump?”

“Don’t Asian Americans know they are on his list as well?” Collins continued. “Do they think they won’t be deported? profiled? beaten? Being a house n****r is still being a n****r. You’re still considered “the help.”

The entire thread was highlighted by a parent-led group titled “Recall SF School Board.”

“How are Asians white adjacent? Look at where we are. Everything white people do, Asians do. They all control the corporate world together. They control big tech, the automobile market, the banking system; they’re essentially white,” the parent stated to Asian Dawn.

“Black people will always be at the mercy of white and Asian people until we take away the tools that make [them] powerful. Their companies, their technology, and their wealth and redistribute them to black people. I’m appalled my only choices in anything, including the phone I use is white-owned or Asian-owned and that’s not right. That very control is proof of white supremacy.”

The parent continued to state, “Reducing the Asian population in Lowell from 50% to 10% is the first step. Educated African-Americans can vanquish white supremacy and the white adjacency Asians share. Standardized tests have unfairly kept black students out of [these] specialized schools to further uphold white supremacy. What white and Asian people fear most is a dominant black corporate board in their companies because they’d lose control and they should lose control.”