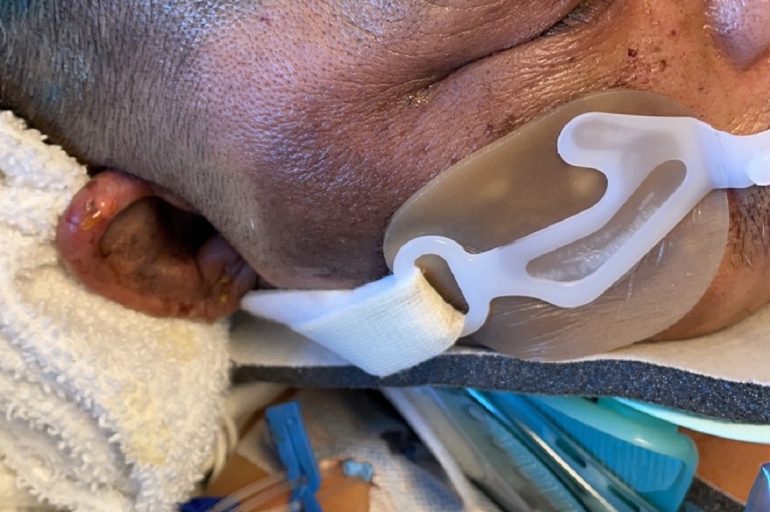 Chan suffered serious head trauma along with severe bruising throughout his entire body as of Monday, March 8. He is currently lying in the intensive care unit at the local hospital.

Mr. Chan’s GoFundMe page can be accessed by clicking HERE

“Please help Mr. Chak Keung Chan get through the hard times, he is a hard-working truck driver who delivered from New York City to Syracuse and got beaten by few teens over the hate crime, he is the only breadwinner in the family supporting his two kids and wife. With his condition now, he is unable to pay his mortgage and bring food to the table.”

According to his GoFundMe page, Mr. Chan had a small surgery in his stomach to connect a feeding tube so he can eat because he is unable to chew, doctors told the wife he will be losing a few fingers due to the severity of the frostbites.

He now has a hemorrhage in his head and the left side of his body has severe frostbites, and damaged nerves, and bruises all over his body. He is unable to speak and move and due to nerve damages.

Mr. Yang, the owner of the Hong Kong Restaurant, stated that he received a call from a garbage company early that morning, explaining they were unable to collect the garbage from his restaurant because of a massive police blockade. “They told me that it might be a fire in the restaurant, so I rushed to the store.”

“I received a call from the police on my way to the restaurant saying that someone was injured in my parking lot and wanted to check the surveillance video,” Mr. Yang explained. When he arrived at the restaurant, Yang saw a few pieces of clothing scattered beside a truck, a lot of blood, and a brick.

Both Mr. Yang and the police reviewed the surveillance footage, but unfortunately, the crime itself was not captured by his cameras. However, other surrounding businesses and witnesses stated they had seen several people/teens of African descent in the area around the time Chan was delivering his goods.

Mr. Chan immigrated to the United States from Hong Kong when he was only a teenager and worked as a truck driver for more than 20 years. On the first of every month, he delivers goods in Syracuse for the company he works for.

When Chan’s wife arrived to see her injured husband in intensive care, she nearly went into shock after seeing his injuries. His body was covered in severe bruises, his face was swollen from head injuries received by multiple assailants, and his face, hands, and body suffered from frostbite; making his skin turn black. Chan finally regained consciousness Sunday night, March 7.