SUNSET PARK, Brooklyn—A Good Samaritan died after he was repeatedly stabbed during an attempted robbery at an illegal gambling den Friday night, according to ABC 7.

They found 46-year-old Yong Zheng mortally wounded on the ground in a pool of his own blood and three other men who were also stabbed were taken to the hospital.

Apparently, Yong Zheng had just finished having dinner with his family when he witnessed a group of African-American males stabbing and assaulting three Asian men outside a restaurant, according to World Journal.

Police arrested 45-year-old William Smith for the fatal stabbing. He is facing charges of murder, robbery, and three counts of assault, reported ABC 7.

Smith was arrested Sunday after police tracked his car, which was apparently caught on camera fleeing the scene.

He is set to be arraigned later Monday.

Smith was convicted of manslaughter for a 1996 death and served 10 years in prison before being released on parole.

He has four other arrests, including at least one for weapons possession, driving while intoxicated in 2010, and drug sales in 2007, according to ABC 7.

“As we were walking home, we heard [the victims] yelling, ‘Robbery, robbery!’” said Xiu Lin, 34, a close family friend of Zheng. “Without thinking, he went up to help and that cost him his life.”

Zheng rushed into the fray and tried to defuse the fight that had spilled onto the sidewalk after a pack of crooks robbed an illegal gambling den on 58th St., police said.

“From his point of view, he saw something happening, he saw a crime, and he just went to help,” said Lin. “It’s a tragic loss.”

“The blood was shooting out. We had friends trying to put pressure on it, slapping him in the face trying to keep him awake,” Lin recalled. “We just didn’t know we were going to lose him. It was just a simple dinner.”

Zheng was disturbed by the recent wave of bias attacks against the Asian community and believed he could be witnessing a hate crime when he intervened, Lin said.

Zheng’s friend Xiong Lin, who had just had dinner with Zheng, also tried to intervene in the brawl but walked away with minor wounds.

Zheng’s wife Jin Zhao, 39, was devastated by the sudden loss of her husband. Members of Chinese neighborhood groups raised $17,000 for the grieving widow — and delivered it to her in cash on Sunday in a somber ceremony.

“I just wish that he’s still here, that I can get to see him again,” Zhao said as her 4-year-old son wiped tears from her cheeks. “Every time I look at my son, I think about the fact that he has no father. … I want them all arrested, I want them to be executed.”

Zheng, who worked as a bus driver before the COVID pandemic and was the sole provider for his wife and two children, had recently moved his family to Philadelphia in fear of them contracting COVID in the city, according to Daily News.

A nearby restaurant owner, Jacky Zhu, 40, remembers walking out and seeing Zheng’s limp body surrounded by loved ones.

The next-door neighbor at Zheng’s old New York apartment remembered the victim as a dedicated family man with a 4-year-old son and 14-year-old daughter.

“It’s terrible. … I really knew the person. I can’t believe it … he was a really nice guy,” said the neighbor, Isabella, 40, who gave only her first name. “I’m very sad because the children were younger. … My son played with his son a lot. They were really good friends.”

After the violence, Lin called Zheng’s wife and children in Philadelphia. His wife rushed to the city Friday night, praying on the drive up that her husband would still be alive. He died before she arrived. 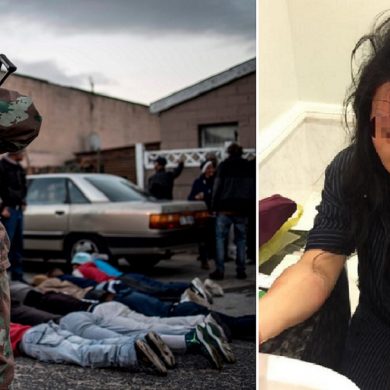