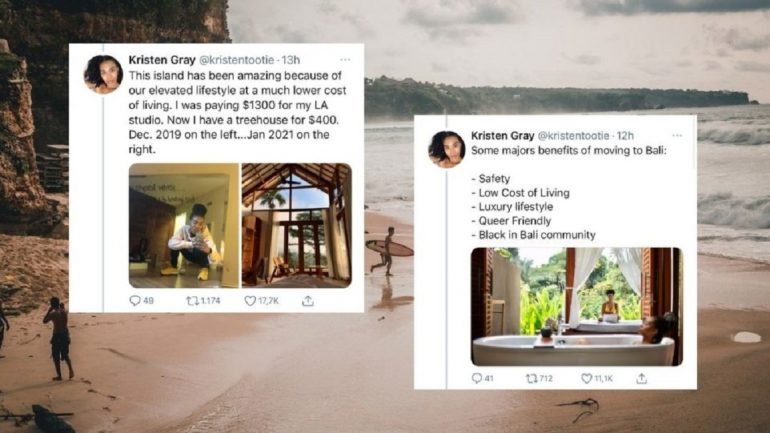 The Head of the Bali office for the Ministry of Law and Human Rights, Jamaruli Manihuruk, said in a statement that official investigation found that the digital nomad known as Kristen Gray, has violated a number of immigration laws, including “spreading information that could unsettle the public,” such as Bali being a queer-friendly and suggesting that foreigners can enter Indonesia during the pandemic, according to Coconuts Bali.

Ms. Gray and her partner will be deported pending the next available flight, according to Indonesian authorities.

“Moving out of America in my 20s has been a game changer,” wrote Kristen Gray. “I’ve been living in Bali, Indonesia for over a year with my girlfriend,” she continues to Tweet.

Gray’s account has since been locked after receiving a large amount of backlash for basically writing a book and bragging about illegally immigrating to Bali, Indonesia, and trying to teach other African-Americans how to do so.

“I was broke, struggling to find work the entire year of 2019 and I wanted to take a stab at entrepreneurship. I also wanted to get out of survival mode and tape into how I could THRIVE,” Gray Tweeted.

“After getting rejected for jobs and living off savings trying to make my business pop, my girlfriend and I decided to book a one-way flights to Bali, Indonesia.”

Gray continued to Tweet, “In March, when the pandemic hit and our 6-month plan went out the window, we decided to stay in Bali to “wait it out” and we’ve been here ever since.”

“Some majors benefits of moving to Bali”

Now if any other person wrote “safety” as their number one reason for moving out of Los Angeles, they would be labeled a racist. Indonesia isn’t the safest place in Asia, however, compared to California or specifically Los Angeles—Indonesia is extremely safe. Now, is it racist to admit an Asian country is safer than the most diverse and progressive state in the Union?

“If you want to know more about our journey abroad, cop our full eBook ‘Our Bali Life is Yours’ at baliebook.com. It’s a guide breaking down how we did it and how you can do it too.”

Indonesian tourist visas are only good for six months, which Gray admits, she’s illegally living in Indonesia and to top it off, teaching other people how to break the law. To make matters worse, she’s not paying any taxes because she’s selling her books in USD. She thinks because of that “loophole,” she owes Indonesia no taxes.

What was the response? “Why would I have to pay taxes if I never made IRD [Indonesian Rupiah]? I pay American taxes for making USD.” There’s just one problem, she no longer lives in America, yet she owes Indonesia nothing?

Many African-American netizens blasted Indonesian citizens for calling out Gray. They labeled all Indonesians as “racist” and “white supremacist.”

Other African-American netizens wrote, “Lmfao now if all Black people were to stop buying from and supporting their business today, then they’d really have their panties in a twist. Don’t bite the hand that feeds y’all sweetie. Just stay quiet.”