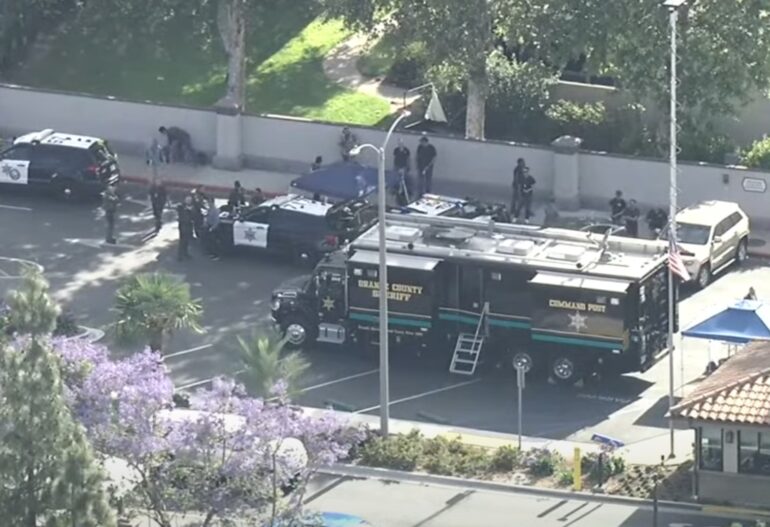 ORANGE COUNTY, California—A group of churchgoers in Orange County managed to stop a mass shooter after he opened fire on a luncheon, hog-tying him with an extension cord until police arrived at the Laguna Woods church.

Unfortunately, one person was pronounced dead at the scene and four other people are critically wounded.

The Orange County Sheriff’s Office stated they received a call of gunfire at the Geneva Presbyterian Church—a Taiwanese congregation—in Laguna Woods shortly before 1:30 p.m. PST. Police said the shooting occurred during a lunch banquet following morning service with about 30 to 40 people in attendance.

The lunch banquet/reception was honoring a former pastor of the Taiwanese congregation, according to CBS News.

“That group of churchgoers displayed what we believe is exceptional heroism, heroism, and bravery in interfering or intervening to stop the suspect,” stated Undersheriff Jeff Hallock. “They undoubtedly prevented additional injuries and fatalities.”

Churchgoers detained the suspect after he opened fire and hog-tied him with extension cords and took at least two weapons away from the suspect. Both weapons were handguns. The suspect was not injured during the struggle.

The suspect is only identified as an Asian male in his 60s.

Although some of these mass shootings may seem overwhelming, they are not the majority of shootings in the United States. Every week in Chicago, Detroit, New York, Atlanta, Milwaukee, Baltimore, and Oakland there are dozens of people killed from urban gun warfare.

Also the other night, three people were fatally shot in Milwaukee after an NBA game, according to Los Angeles Times. Two days earlier, an African-American man and a pregnant woman were shot and killed in Baltimore, leaving the newborn in critical condition, reports NBC News.

Lone wolf attacks happen and they are horrible. The Buffalo, New York shooting was horrible. However, the amount of Black-on-Black violence in Chicago in one week outnumbers the Buffalo mass shooting. That’s not counting how many people are shot and killed in Chicago for an entire month in any given year.

Are Black lives not important? Or are these numbers ignored because it doesn’t fit the narrative that Caucasian or even Asian males do not commit the majority of mass shootings in the United States?