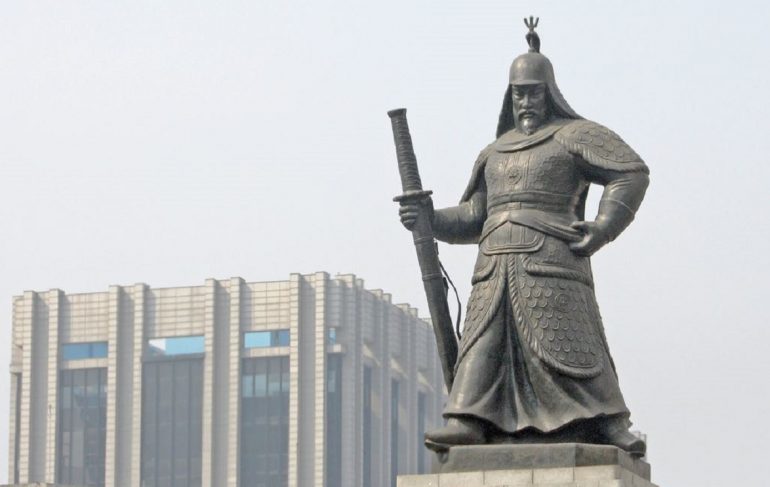 The year is 1592 and a newly unified Japan under the leadership of Toyotomi Hideyoshi (1537-1598) is setting his eyes on the conquest of China via Korea, also known as the Kingdom of Joseon.

The Japanese military is the best trained and most powerful fighting force in the world at the time. They just finished fighting a 100-year civil war and as a result, created extremely experienced soldiers and generals. In 1575, the Japanese invented the world’s first continuous volley fire.

The Battle of Nagashino. A force of 3,000 Japanese arquebuses in three ranks led by daimyo lord Oda Nobunaga defeated a sizable amount of samurai calvary from a rival clan by continuously firing into charging lines, thus winning the battle. The Dutch, who along with the Portuguese initially supplied the Japanese with arquebuses (until the Japanese eventually manufactured their own improved design) would later perfect Europe’s first continuous volley fire in 1594.

This technique was unfortunately lost to the Japanese. After the accession of the Tokugawa Shogunate. Japan closed its doors to the outside world from 1600 to 1868.

The Koreans on the other hand enjoyed 200 years of peace with a relatively stable government, which of course after 200 years, became corrupt. Koreans mainly concentrated on minor naval skirmishes with pirates along their coast.

The Japanese Invasion of Korea from 1592 through 1598 (Imjin War). When Japanese forces launched an invasion of the Korean Kingdom, the highly trained Japanese samurai and their continuous volley fire tactics completely destroyed Korean and Ming Chinese forces.

The Koreans and Ming Chinese forces lost hundreds of thousands of soldiers battling the Japanese who at their peak totaled around 300,000 men. It got so bad, within weeks, Seoul was taken by Japanese forces in 1592. Korean forces and government officials were eventually driven to the Chinese border, four years into the war. The Koreans were facing complete destruction.

Enter Admiral Yi Sun-sin. He did not come from a privileged family and rose up the ranks through merit as an infantryman. He had no naval experience and was demoted numerous times because of jealous officers.

Eventually, Yi would be promoted to admiral and asked to lead a force of 13 ships against the entire Japanese army and navy.

“It may be proper to compare me to [Admiral] Nelson, but not to Korea’s Yi Sun-sin. He is too great to be compared to anyone,” stated Admiral Heihachiro Togo (Japan’s greatest admiral who destroyed the entire Russian Navy in the Battle of Tsushima in 1905, thus causing Russia to negotiate peace with the newly formed Japanese Empire).

Admiral Horatio Nelson (1758-1805) of the Royal Navy fought 13 battles, winning eight of them. Admiral Yi Sun-sin fought 23 battles against the Japanese and won every one of them without losing a single ship. In 14 of these battles, not a single Japanese ship survived.

Admiral Nelson and Admiral Yi had many things in common. They both fought a navy designed for amphibious warfare. This meant both Japanese and Spanish warships were top-heavy, which limited their maneuverability and firepower.

The English and Korean warships were designed for naval warfare, not amphibious. They were both sleek and designed to carry large amounts of cannons, which inflicted devastating volleys at the enemy, according to Military History.

Like Nelson, Admiral Yi died in the final battle that saved his country. They were both killed by a single random gunshot from the opposing side.

Feature Image via My Hero