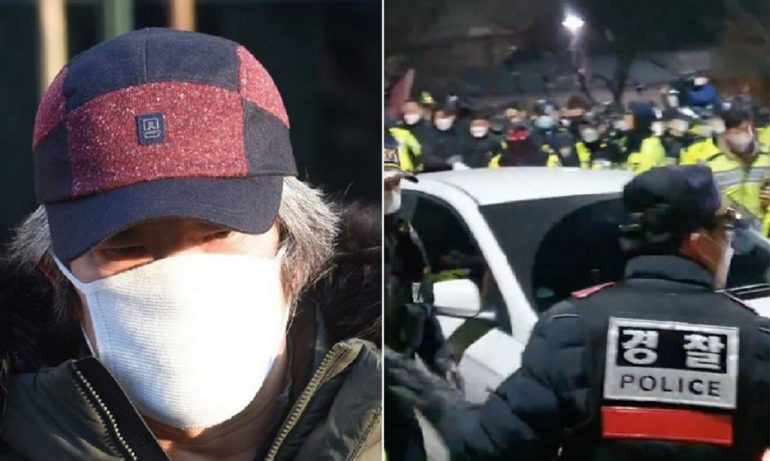 Notorious child rapist Cho Doo Soon was released on Saturday, December 12. Needless to say, his release pissed off an entire nation. Cho was sentenced to 12-years in prison back in 2008 for kidnapping and raping an 8-year-old girl on her way to school in Ansan, Gyeonggi Province.

Police had to escort 68-year-old Cho Doo Soon back to his home in Ansan city, south-west of Seoul because of fears he would be lynched to death by the general public. Nearly 100 police officers formed a protection detail and safely escorted Cho back to his house. However, some 150 protesters did not make his return a “pleasant experience.”

Cho has been receiving thousands of death threats, among which many people threatened to castrate him alive, according to The Strait Times.

In 2008, then 57-year-old Cho Doo Soon kidnapped and raped an 8-year-old girl on her way to school in Ansan, Gyeonggi Province. Cho took her to a church restroom, choked her, beat her, and brutally raped her. The victim was left with severe injuries, which resulted in permanent internal damage as well, according to The Korea Times.

Cho was sentenced to 12 years in prison for his crimes. Authorities took into account Cho was mentally and physically unstable due to being under the influence of alcohol. It should be noted, Cho has 17 other criminal convictions dating as far back as 1970, including sexual offenses and murder.

For the past three years, over 5,500 public petitions related to Cho Doo Soon have been filed on the Cheong Wa De (Blue House, S.Korea’s White House) website, urging government officials to find a way to incarcerate him forever.

The victim’s father stated, “My daughter still has to wear a diaper at home. She has to carry the largest sanitary pad in her bag when we go on a long trip. People won’t know how we feel as parents if they never experienced this before. I live feeling like a sinner who was not able to protect his own child. I hear that Co Doo Soon is coming back near our home. Does this even make sense?”

According to Allkpop, The victim’s father stated in an interview on September 20, “Cho Doo Soon claims to have self-reflected, then why does he return to the town of Ansan where the victim is? I want to give him 20 million or 30 million KRW for him to leave even if I have to take out a loan.”

“Our family can’t joyfully watch TV together anymore. When news breaks out about a sexual crime, my daughter faints right away. That is why my daughter can’t watch the news at all. She used to have a TV in her dorm when she was in college but asked to take that TV away as well. When she comes home during the break, she only can watch cartoons that children watch. I feel she is becoming socially isolated because she doesn’t watch much TV.”

After the sexual assault, the victim had to live with a bowel pouch on her leg. “At first, my daughter seemed like a soulless zombie that you see in the movies. She was blank all the time. She had to receive treatment twice a week for four years until she graduated from elementary school.”

The victim did not have an ordinary nor easy time in school. Sometimes her bowel pouch would pop during class. The victim’s homeroom teacher would always prepare a dark plastic bag so that she can clean up the pouch in case of an explosion.

“If Cho Doo Soon self-reflected, he wouldn’t come back to Ansan where the victim is. I don’t understand why he wants to come back. I want to ask the government to persuade him to live quietly somewhere else because all the residents of Ansan are against him coming back. I feel he is retaliating by moving back within 1 km of the victim,” the father explained.

Cho will taste freedom again soon, but he will be under strict probation guidelines including wearing a GPS-enabled electronic ankle monitor, which he must wear for the next seven years. His and address and personal details will be disclosed for five years on a government website.

Feature Images via The Strait Times