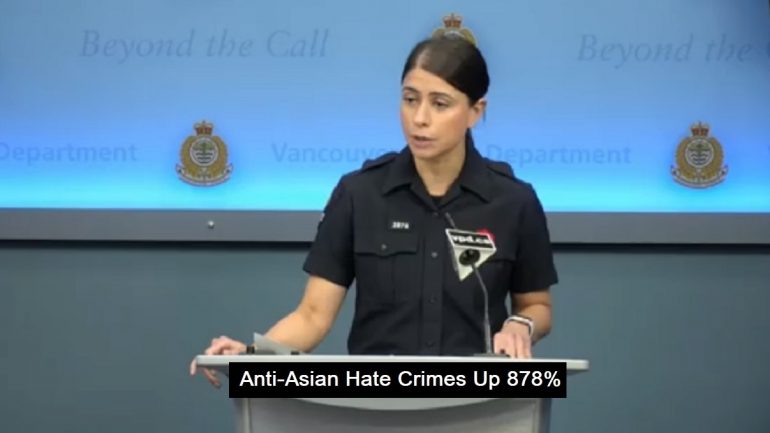 Police say a woman walking on Granville Street near Helmcken Street Wednesday afternoon, November 11 was approached by a man she didn’t know, according to CTV News.

The man reportedly punched the woman in the nose and caused her to fall to the ground.

“I was in the store and I heard screaming and crying,” said Jared Miller, who works at 8th and Main clothing store on Granville Street.

When Miller went outside, he saw the woman on the ground with a bloodied nose and she was crying. He immediately took the woman inside his store for refuge.

“I just wanted to create a safe space for them, being out in public after that happened is really hard to do,” he said. “It was shocking to see without context, I think later with the context it was more shocking to know what happened,” Miller continued.

The suspect is described as a Caucasian man between the ages of 20 and 30, and about 6’ tall. He has a thin build and short hair and was wearing a red and yellow T-shirt, dark pants, and sneakers at the time of the assault.

The next day, another Asian woman reported being assaulted.

The second victim was walking down a street when a man passed her and spat on her face and continued walking like nothing happened.

“No one deserves this,” Const. Tania Visintin said. “There nothing that could ever provoke this type of disgusting assault. Thankfully with this spitting, the silver lining is we do have DNA, so hopefully that’ll help the investigation along.”

The second suspect is described as 5’5” or 5’6”, with dark brown, shoulder-length hair. He was wearing dark, baggy clothing, according to CTV News.

“What concerns us most about these files is how completely random both assaults were,” Visintin said. “Evidence indicated the victim and suspect have no relation to each other in both cases.”

Anti-Asian hate-crime incidents were up 878 percent over the same period in the previous year, Vancouver’s police board reported.