Asian Family Racially Harassed While Walking to the Beach 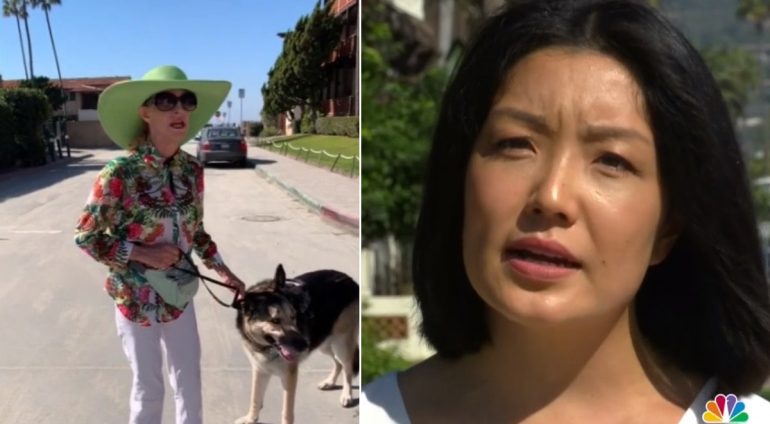 LA JOLLA, California—Jane Woo said her husband and their 1-year-old daughter were racially harassed last Thursday, October 29 as they were walking down Avenida de la Playa, according to NBC 4.

As the Asian family headed to the beach, a woman who was walking her dog stopped them.

“She started making a beeline toward my husband, and whispers in his ear and says, ‘Why do Muslims behead white people and not Chinese people?’” Woo told NBC 7. “My husband was like, ‘OK, just ignore her.’ And I think that’s what set her off because she started asking repeatedly and didn’t let us move through, and she didn’t have a mask on, either.”

Woo continued to explain the woman followed her and her family across the street. That’s when Woo started filming.

“We were just kind of like stunned and laughing because it was so ridiculous,” Woo said.

The woman in the clip can be heard asking, “You think being beheaded is funny? You think murder based on race and ethnicity is funny?”

Woo’s husband replies, “No, I think you’re coming up to me very closely.”

The woman responds, “I think that’s called a crime on humanity!”

Woo speculated the woman was referring to the recent attack in Nice, France, which doesn’t really make any sense because Asians took no part in the attacks in Nice, France last week.

“Are you assuming I’m Chinese based off looking at my skin color and my hair? Do you not know I’m Korean-American?” Woo replied to the woman.

“She made a direct target toward my husband, who also has black hair and looks very distinctly Asian, and to assume that all Muslims, that in itself is also hateful rhetoric, right?” Woo said. “It was just very ignorant.”

Woo continued to explain this was the second time she’s been racially profiled in the past two weeks in San Diego County, but this time she was with her family and felt safe in her own community or so she thought, according to NBC 4.

“It broke my heart, essentially,” Woo said. “And I think—even standing here now—I do feel like triggers, like is someone going to come up behind me? Is someone going to start randomly accosting me for no reason? And that’s not the America I want to live in.”

Woo’s great-grandparents were the first in her family to emigrate to the U.S. from South Korea, both were in their 20s when they first arrived.

“You know, immigrant story of just starting off with nothing and really just building a life, and that’s the beauty of America,” Woo said. “That what makes this place a hope-filled place, and I feel like we’ve lost a sense of that.”

According to NBC 4, Woo also reported the incident to the Asian Americans Advancing Justice organization, which has received 3,000 similar complaints since March.