PHILADELPHIA, Pennsylvania—From Monday through Wednesday, thieves, and vandals broke into at least 17 beauty supply stores, making off with merchandise and store fixtures. Losses are estimated in the hundreds of thousands of dollars, according to The Philadelphia Inquirer.

Over 100 Korean-American-owned beauty supply stores in the city of Philadelphia, have experienced some form of looting, theft, or vandalism from the recent riots sparked by the police shooting death of a knife-wielding African-American male, Walter Wallace Jr.

The Philadelphia Inquirer reports some Korean-owned stores were targeted multiple times throughout the week and were also previously targeted back in May after the shooting death of George Floyd in Minneapolis.

“Some owners tried to call the police, but they didn’t respond,” said Sharon Hartz, president of the Korean American Association of Greater Philadelphia. “A few had a chance to get police but when they came, they dismissed it. Groups of 20 to 30 people came to loot at a time. It was scary.”

Sharon’s group provided a count of damaged shops. “Some of the stores, they’re thinking of closing down for good,” she stated.

Korean-Americans are extremely frustrated at the Police Department, who were specifically ordered to stand down and allow looters to loot, according to News Break. The Democratic politicians regard black lives, even armed non-compliant black lives more important than the livelihoods of Korean-Americans and other hardworking business owners who pay their taxes.

Some Korean-American merchants hired private security guards at a cost that reached $3,000 a night for some. Others armed themselves like the Korean-Americans did in Los Angeles back in 1992.

“I was behind the window with my double-barreled shotgun and a handgun praying [the looters] don’t get past my gate,” said one Korean-American merchant, who did not want to be identified. “I was scared for my life, because there’s no way a single guy is going to deter 30 looters if they all want to all come in.”

Thankfully, no one approached his store, The Philadelphia Inquirer reported.

55% of Arrested Suspects Reoffend Before Trial Date in SF

Real estate agent and president of the Korean American Chamber of Commerce in Philadelphia, Michael Choe, said some members were troubled when the City Council adopted a bill this week that would forbid police officers from using tear gas and rubber bullets on demonstrators.

“Police will decide not to engage with the looters,” Choe said. “That makes things a lot worse. The business owners may be put in jeopardy.”

Korean business owners “feel left out of the conversation. Between police reform, proper enforcement, racial inequities, that is a conversation that contains little or no concern about them,” stated Councilman David Oh.

Feature Image via The Associated Press 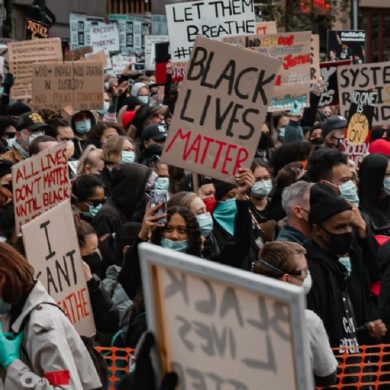