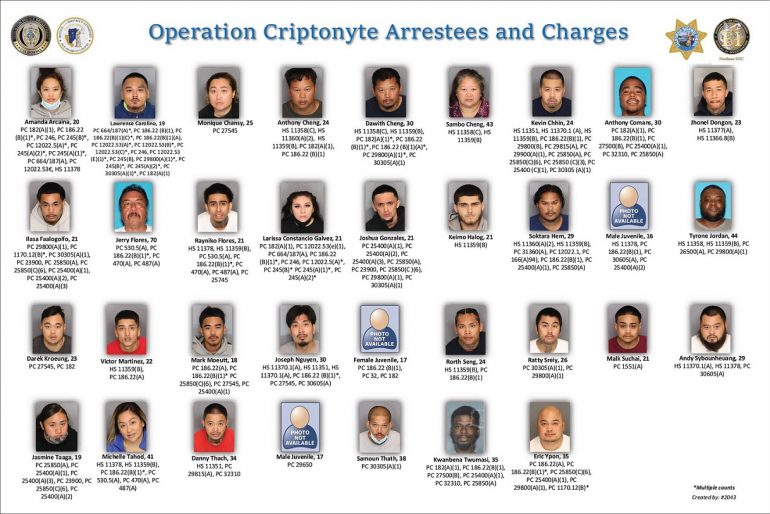 STOCKTON, California—The Stockton Police Department announced on Thursday, October 15, the success of “Operation Criptonyte,” which was created to disrupt criminal street gangs in the city, according to ABC 10.

The investigation began back in June 2020 and resulted in 55 search warrants, 38 recovered firearms, $40,000 seized, and 34 people arrests related to various criminal activities, according to Stockton police.

“Part of our gun violence intervention strategies is to identify those groups individuals who continue the gun violence in Stockton putting our entire community at risk,” Stockton Police Chief Eric Jones said.

Authorities also confiscated one pound of cocaine, five pounds of methamphetamine, 1,300 pills of ecstasy, and “an abundance of marijuana,” according to ABC 10.

“Families in Stockton can breathe a little easier tonight,” said California Attorney General Xavier Becerra in a statement. “This investigation and resulting arrests and seizures are an example of what happens when California law enforcement agencies work together to combat violent crime in our communities.”

The Stockton Police Department highlighted some of its arrests:

On top of arrests made in gang-related activity, drugs, and illegal firearms, Stock police also uncovered an Unemployment Insurance fraud scheme. Rayniko Flores, 21, Michelle Tahod, 41, and Jerry Flores, 70, were arrested for their roles in EDD fraud and the identity theft of numerous victims, reports ABC 10.