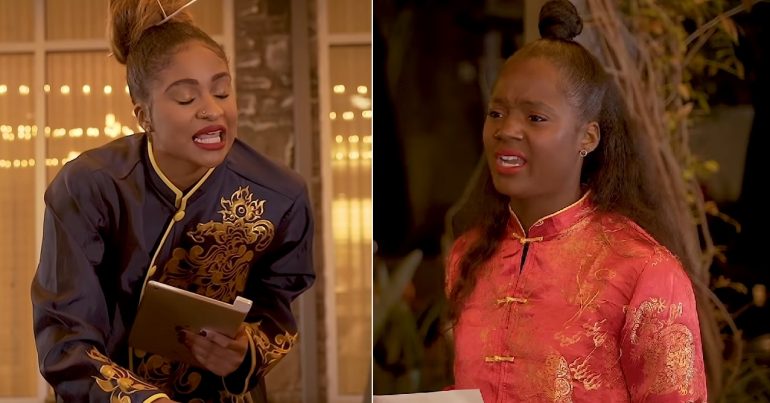 African-American comedian Kinigra Deon originally uploaded a comedy skit back on February 20, 2020, on YouTube. The skit is called “Ki-Mon-Chi Black Asian House” with the caption “where you can find the best blasian cuisine on the market. We give you the best customer service just for $5 more.”

The skit starts off with an African-American couple entering “Blasian House” and requesting a more secluded area.

The African-American female employee dressed in a Chinese outfit speaks in a fake Chinese/Vietnamese accent and replies, “Oh no honey, we very busy, but I do for you $5 more.”

As the female employee sits the couple down, she begins to compliment them on how good they look with each other, all the while saying it in a Chinese/Vietnamese accent and trying to impersonate how a stereotypical Chinese woman walks. However, the African-American female comedian fails to pull it off because of her borderline obese lower-half.

Another female African-American employee shows up, also dressed in a Chinese outfit, speaking in a heavy Chinese/Vietnamese accent, and takes the couples’ order. One of them orders eggrolls.

The first employee then shows up to the table and begins to roll two unbroken eggs over an empty plate, saying “this is how we make eggrolls in our country.”

The couple demands the employees take back their “eggrolls,” to which the employee agrees, but then says “Okay honey, we still charge you, you already make for you.”

As the skit progresses, it shows the employees bringing out food that is absolutely nothing like what the couple ordered at the beginning. As the couple complains about the quality of the food, the restaurant employees racially insult them for complaining.

The employees then communicate with each other in jibberish and condescendingly insults the couple once again for misunderstanding what they hear as more insults. As the skit ends, the employees charge the couple $500, while saying “We give discount for you.”

The skit has over 121,000 views on YouTube and many African-American users commented on how “hilarious” they think the comedy skit was. This type of comedy skit would immediately be called “racist” if it were the other way around. But somehow, African-American comedians are immune to their own standards of racism?