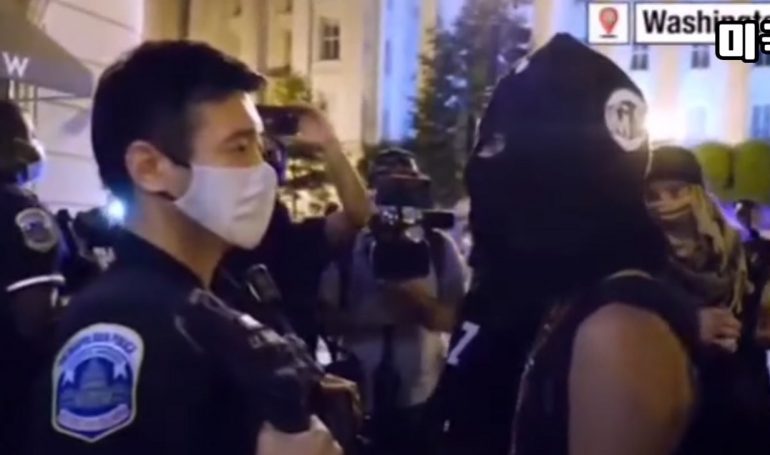 The altercation took place Friday, August 28. The protest was organized by Black Lives Matter and was about the unjust shootings of black people by police officers. However, according to Statista Research Department, more Caucasians are shot and killed by police than African-Americans and that number has been decreasing in the last few years.

In the clip, the Korean woman is initially screaming in Korean: “Oh my God! I’m scared!” at the police officer. The police officer is doing nothing to instigate her. He’s simply standing there.

As the clip goes on, she can be seen taking orders from an African-American male in a ski mask on what insults to say next. He orders her to say “DCPD suck my d**k.”

She then repeats “Oh my God! I’m scared!”

The Korean woman then brings up ancestors, which is one of the most Asian things you can do.

“I don’t know about you but my ancestors are so proud of me!” she screams. “Suck my d**k!”

She begins to follow the police officer, constantly verbally harassing him for being a police officer when he should be getting on his knees and shining the shoes of his true masters, the African-American.

“You f**king pig!” she screams. “Your ancestors are so f**king ashamed of you.”

“Why don’t you answer me!?” she continues to scream in Korean.

The police officer kept his cool and from his facial expressions, seemed unphased by the Korea woman’s constant childish, communistic attitude toward him.