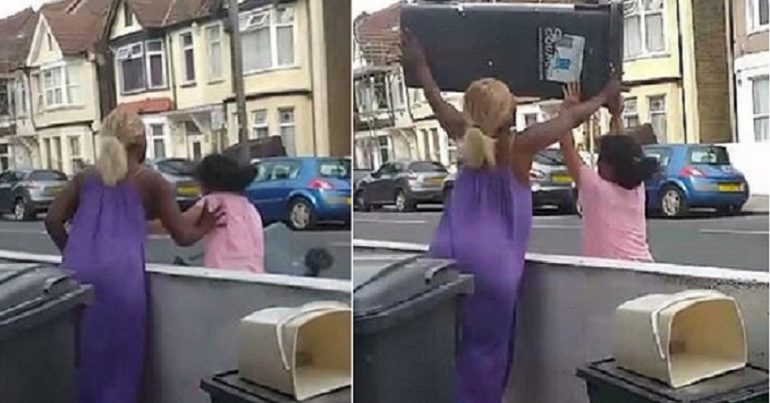 A North Korean asylum seeker in the United Kingdom, named Myungseo has claimed she has been suffering ongoing verbal and physical abuse from her neighbor. The animosity ignited between the two over trash bins late last year and has been spiraling out of control ever since.

Smartphone footage captured by one of Myungseo’s daughters shows the neighbor spewing racial insults “You’re an asylum seeker. You’re not from this country!”

“I really need your help as I have been assaulted several times by a neighbor and my kids are constantly anxious and scared. It’s only me and my children, we don’t have any relative or friend in the UK and this situation is affecting my mental health and my children’s wellbeing.”

Myungseo moved to the property around November 2019 and didn’t understand how the UK trash collection system worked. Allegedly, Myungseo and her neighbor came to an agreement to share trash bins, according to the Daily Mail.

She claims a dispute erupted when she moved the trash bins to avoid leaves falling inside them from overhead trees and rotting.

The North Korean asylum seeker claimed the incident was the genesis for the several physical and verbal altercations she’s endured. Myungseo stated she initially did not contact the police because of her limited English skills but contacted Migrant Help instead.

She wrote: “No one is telling my neighbor off or warning her, she just continues abusing and threatening us.”

Other allegations include the neighbor throwing a brick at her door last December and continuously throwing trash at her and her family day-after-day. Daily abuse eventually led to a full-fledged fight between the two in May 2020.

The fight allegedly started over a blocked rain gutter and escalated into hair pulling and face-punching. This time the police were finally summoned to the scene. Myungseo stated, “I defended myself so when the police came I told them I had twisted her arm.”

“My neighbor told the police we would resolve the issue ourselves and the police told me that they could not help me because I did not have evidence of the neighbor physically attacking me.”

Myungseo then installed CCTV outside her home to help collect evidence for the police, however, the neighbor allegedly “pulled the cable and cut the camera off.”

“She is taking advantage of a woman and two children with nobody here to protect us. I feel like a failure because I can’t protect my children from this despicable woman.”

“The pain, abuse and assault I have suffered at the hands of this woman are indescribable.”

Feature Screenshots via The Daily Mail