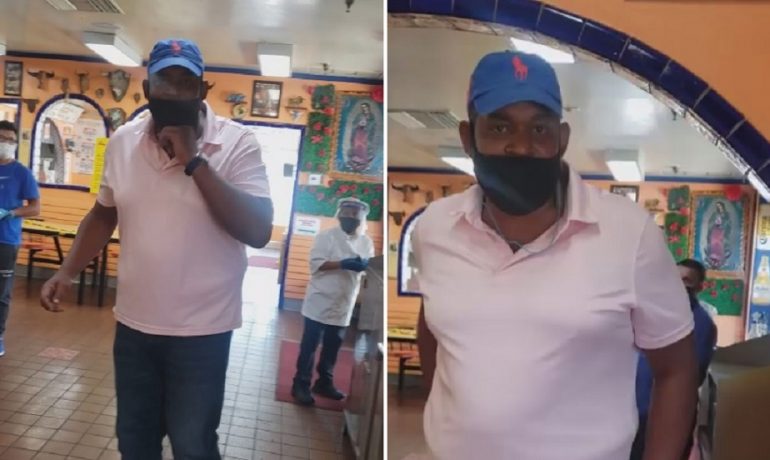 A Korean woman, surname “Lee” explained what happened “This afternoon, I was verbally and almost physically assaulted by a stranger due to the color of my skin. While I was waiting in line to order food, the person next to me handed me their card and said let’s have lunch together. I declined and said, ‘I’m sorry, I’m married.’”

The antagonist, who identified himself as Fredrick Douglas Smith then snatched his card back from Lee’s hand and started screaming obscenities at her. At one point, she looked at the other men waiting in line behind Smith and asked “Can you help me?”

Smith interrupted her pleas for help and said “Go back to Asia! You fu**ing bi*ch! You motherfu*ker.”

In the two minute clip of the incident, Smith at one point gave his full name and social security number and date of birth to Lee while walking towards her.

“Nobody ain’t gonna help you. Police can’t do sh*t to you in front of me. Not a god damn thing!” Smith confidently stated to the now distressed Lee. He almost sounded arrogant because he is African-American and he is beyond authority.

“I’m a contributor to the Obama administration! You fu**ing Asian cu*t! Get the fu*k out of here, you bi*ch!”

By now Lee is breaking down in tears from the verbal abuse. Two other men waiting in line behind Smith and later joined by two other restaurant employees intervened and escorted him out of the restaurant. As Smith was led away, he screamed “Black Lives Matter!” to Lee.

“I will never forget the words that this man uttered. Please share this video so we can raise awareness that treating everyone with love and kindness is more important now than ever before. I hope and pray that someone can recognize this man so he can get the help that he desperately needs before another person is attacked,” Lee stated on her Facebook page.